The story of how satellites can help man and the Planet, as told through the images of the 2021 Telespazio and e-GEOS calendar, Love Planet Earth, in collaboration with National Geographic Italy. For the month of November, we have explored the role satellites can have in monitoring rising sea levels and coastline erosion.

The oceans cover three quarters of the Earth’s surface, with 97% of the water on Earth, and more than three billion people who depend on marine biodiversity for their livelihood. These numbers inspire us to reflect on the importance of safeguarding the seas and coastlines, and how satellite technology can provide crucial assistance in the pursuit of the UN 2030 Agenda Sustainable Development Goal 13: Climate Action. 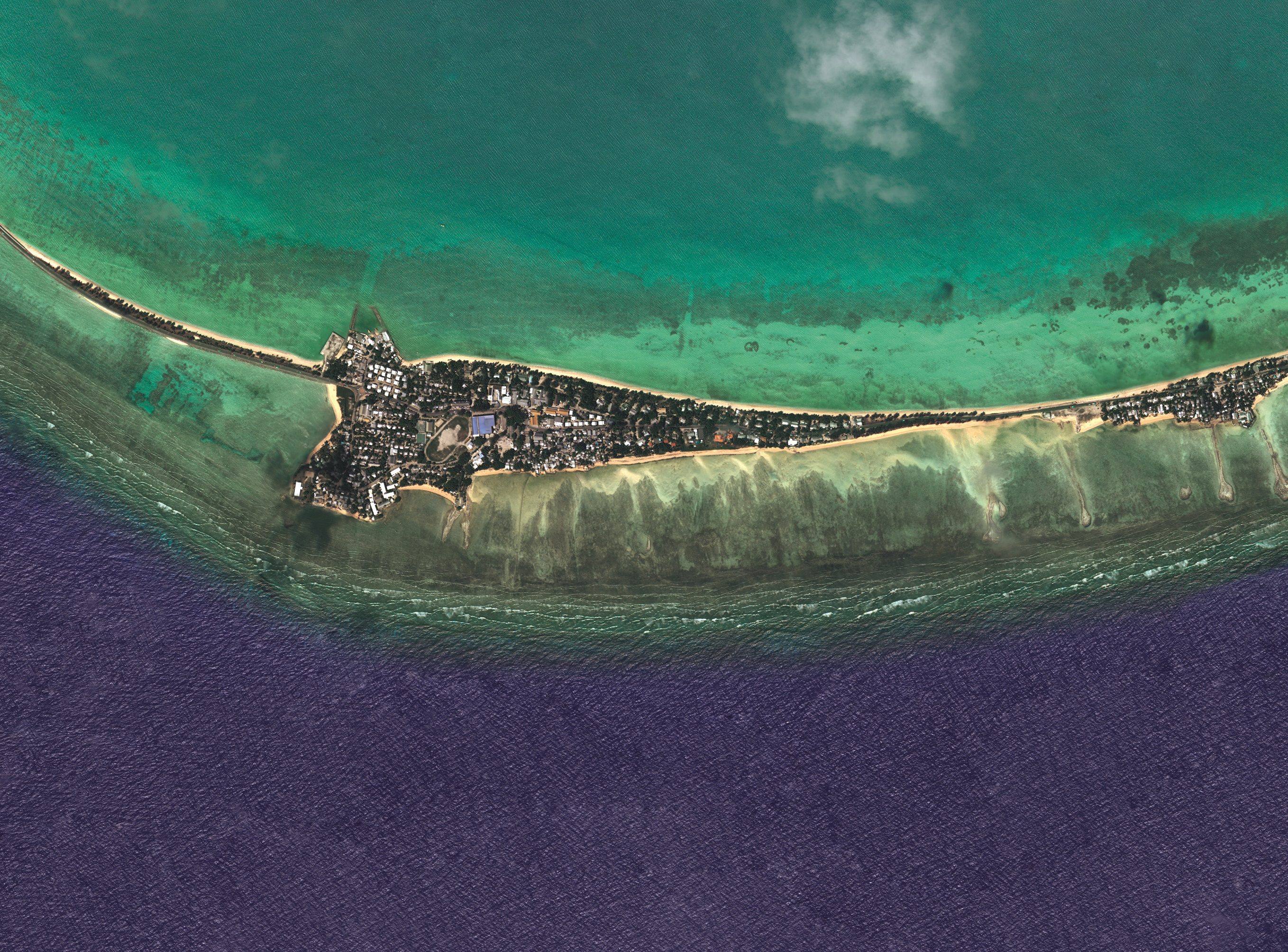 The satellite image shows us South Tarawa, the capital of Kiribati in the central Pacific. Most of the country’s islands are no more than 2 meters above sea level, which means the population, amounting to about 100,000 inhabitants, lives in an environment particularly exposed to climate change.

The National Geographic image features children along the city’s streets, which are being flooded by the increasingly frequent high tides, caused by the rising sea levels as a result of climate change. Space technology makes an important contribution to the monitoring of this phenomenon through international programmes focused on the region. Leonardo plays an important role in these through satellite manufacturing alongside Thales Alenia Space, in data acquisition, services and applications with Telespazio and e-GEOS, and through developing sensors – the “eyes” of the satellites – many of which are created in Leonardo’s laboratories.

Cultivating the potential of space technologies to support sustainable development is one of the pillars of the company’s Be Tomorrow – Leonardo 2030 strategic plan, and part of our overall Sustainability Plan.

To find out more about Leonardo’s contribution, we spoke with Daniele Pellegrino, Product Manager at the e-GEOS Geo Information Centre. 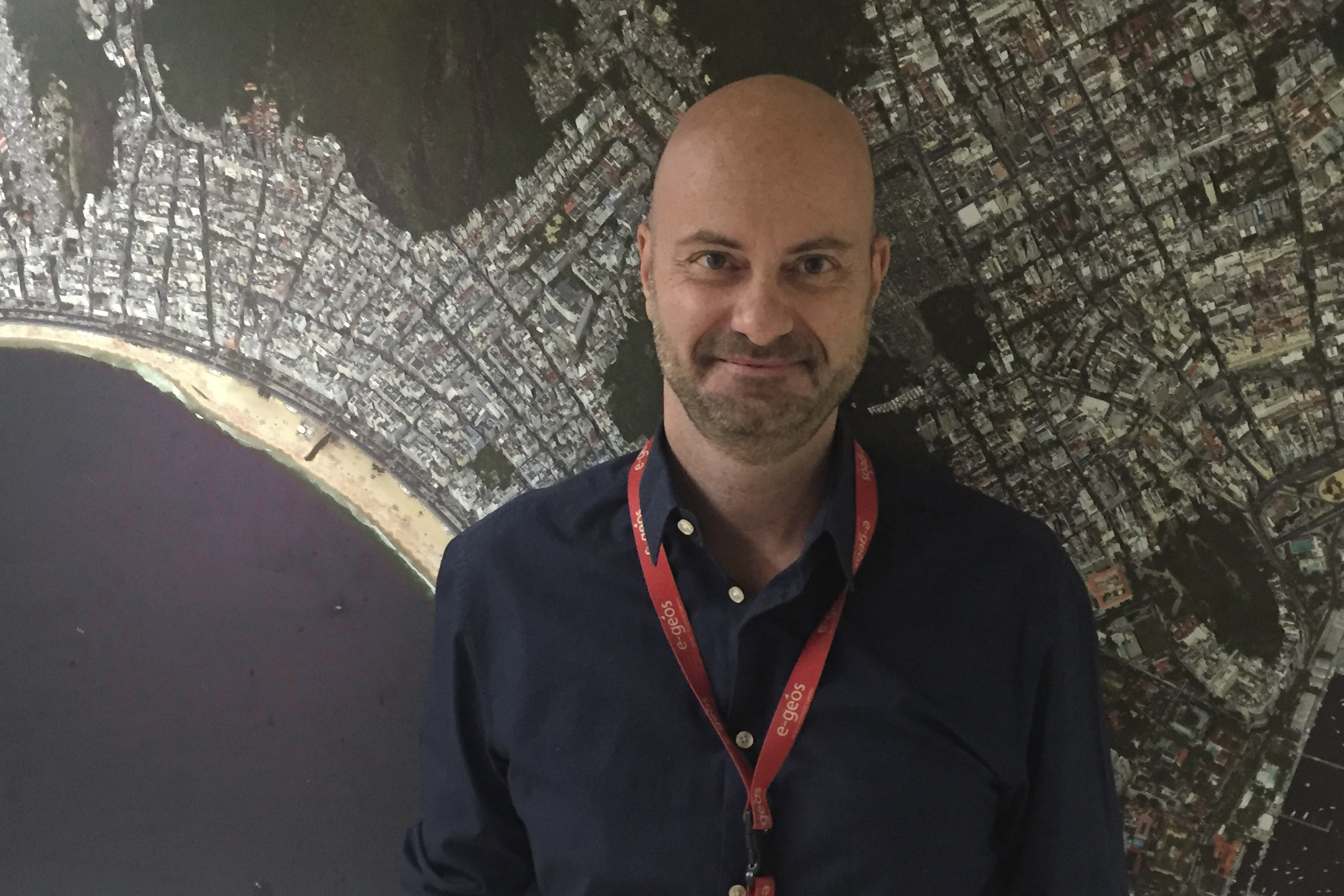 How do satellites monitor rising sea levels and coastal erosion?

According to studies, if current greenhouse gas emissions do not reduce by the end of the 21st century, the sea level could rise by one meter. Recent research has even bumped estimates up; in the most pessimistic scenario, we could see an increase of 1.5-2 meters. However, even if we are able to reduce emissions, the expected rise would still range between 30 and 60cm. In Italy, coastal towns have a population of about 16.9 million inhabitants, or 30% of the Italian population; in Europe, among the sea-facing nations, almost 50% of people live less than 50km from the coast. These numbers alone demonstrate the importance of safeguarding coastal areas.

Coastlines, being the transition between marine and land environments, are a unique environment, highly urbanised and particularly critical in balancing the planet: they are subject to erosion from the sea and allow pollution produced on land to enter our waters. Satellites can efficiently monitor these two aspects on a daily basis thanks to their ability to control large areas of land. They also allow us to analyse how human behaviour affects coastal environments. In this regard, Telespazio UK is carrying out a pilot project on the Australian Gold Coast, an area that has historical problems of erosion which are also significantly impacted by typhoons and storms that periodically sweep through the area. Satellites can also monitor the quality of seawater through parameters such as salinity, the concentration of suspended materials, Coloured Dissolved Organic Matter (CDOM), and chlorophyll. The advantage that satellite data has over measurements made from sea level is the satellite’s ability to provide information from a very large area at the same time. Thanks to satellites, we can also monitor waves and wind trends through special inversion algorithms. In addition, satellites’ “eyes” are also very useful tools for emergency management, like when a ship spills fuel, for example. Using a satellite, we can immediately understand the size of the oil spill and its drift (also thanks to data on waves and wind), and predict whether it will arrive on the beaches with all the consequences that would entail. On the emergency front, it is also possible to carry out an analysis of coastal landslides and subsidence phenomenon with SAR interferometry techniques, which allow us to evaluate the altimetric variations of the soil and their trends. This offers invaluable assistance to decision makers, as it allows them to understand if an area can be built upon or not. Satellites can also support us in choosing ideal locations to install offshore wind platforms, based on the trend of waves and wind over a certain area. Through our dedicated platform, we are able to show a large amount of information extracted from satellite data in a simple and intuitive way that is also useful in the management of coastal environments. For example, the platform can map coastline trends extracted from the satellite, as well as coastal defence projects, enabling data analysts to know how effective these projects are.

What advantages does the platform offer?

e-GEOS has created a solution called Geo Information Centre – a platform capable of providing customers with value-added products based on satellite imagery. This tool allows us to integrate systems, processors, algorithms and different application platforms as if they were a Lego set. This allows customers to take advantage of on-demand services to independently choose the satellite image, process it, watch it and decode it through a single web platform. With regard to coastal monitoring, e-GEOS provides the customer with a platform that simplifies everything through automation, allowing them to obtain the desired processing through a few steps. When their product is ready, the customer receives a link to access the platform and view the data and information selected. The customer can then superimpose different data on top of each other to provide a comprehensive overview of the situation.
From the platform, users can connect to external services, such as those of the Institute for Environmental Protection and Research (Istituto Superiore per la Protezione e la Ricerca Ambientale or ISPRA), to take inventory of coastal landslides. The e-GEOS service also provides a virtual laboratory that allows customers to develop and test new algorithms by accessing a large amount of data and, without having to download it, processing it in the Cloud using the platform’s resources instead. The results can be shared within the community of researchers to increase knowledge and develop new products to be made available on demand.

What other services does the platform offer?

The platform can also be of interest to those who work in renewable energies and need to monitor a phenomenon such as wave motion, as well as to entities such as the ARPA (Italy’s Regional Environmental Protection Agencies) which deals with environmental monitoring, and civil protection agencies for monitoring emergencies. Furthermore, the platform can also be used for land planning, to monitor hydrogeological instability of the coasts, pollutants in the sea, the water’s general health, climate change and its effects on the sea level.
Thanks to the satellite, we can monitor both the level of rising waters and coastal erosion that are not always related phenomena. Since 2012, we have been monitoring Italy’s Circeo coast, in the Lazio Region. The platform offers a tool that can capture all the coastlines recorded over the years, and present them in order with the relative date of acquisition to immediately grasp the movements of the coastline over time, in a sort of time-lapse. The data showed that in some cases, the coastline advanced, and in others it receded, recording no change worthy of note over the period of observation.

For more interviews on Earth observation technologies and solutions, check out our other interviews.

Our journey into the world of sustainability continues in December through the images of the Telespazio and e-GEOS 2021 Love Planet Earth calendar, featuring shots from National Geographic. This month, we focus on the role of satellites in monitoring and fighting the effects of extreme weather in cities.

Our journey into the world of sustainability continues in December through the images of the Telespazio and e-GEOS 2021 Love Planet Earth calendar, featuring shots from National Geographic. This month, we focus on the role of satellites in monitoring and fighting the effects of extreme weather in cities.