Leonardo's Board of Directors, convened today under the Chairmanship of Luciano Carta, examined and unanimously approved results of the first nine months 2022.

“Our solid Q3 results - Alessandro Profumo, Leonardo CEO, stated - confirm the underlying strength, current and for the future, of the business, with new order intake up 26.8%* and a backlog equal to about 2.5 years of production. Our defence/governmental business remains strong, with growing opportunities both domestically & internationally. We are seeing a gradual recovery in civil Aerostructures. We continue to manage the impact of pressures from inflation, supply chain and other challenges of the external environment. Our good commercial momentum allow us to capture opportunities, we are carrying this positive commercial momentum forward, allowing us to upgrade our full year new order guidance from ca. € 15 billion to a level higher than € 16 billion, lowering our year end expected Group net debt level from around € 3.1 billion to € 3.0 billion, thanks to cash generation and including extraordinary transactions, and we are also slightly raising our FOCF for the full year, confirmed at ca. 500 million notwithstanding perimeter effect”

"In addition, - Alessandro Profumo concludes – these months has also seen important moves towards the closing of DRS and RADA deal. This will reinforce Leonardo DRS core business of sensors and integrated systems in the fastest growing segments of the US DoD budget and current global defence requirements and needs. We have also strengthened our decarbonization plan by committing to Science Based Targets Initiative (SBTi). All of this makes us confident in the medium-long term value creation benefitting all our stakeholders”.

The results of the first nine months of 2022 continue to confirm the path to growth and increased profitability expected starting from 2020, despite the critical issues emerged at global level, especially as a result of inflation.

This path to growth is even more pronounced considering that, unlike the comparative period, EBITA for the period includes the charges related to the COVID emergency as recurring costs. The restated figures for the two periods under comparison have been provided in order to make them comparable. Additionally, the results for the nine months are affected by various changes in the scope of operations due to the strategic transactions occurred: the acquisition of the 25.1% investment in the German company Hensoldt, the pro-quota profit of which is recognised within consolidated EBITA, and the lower contribution from the disposal of the Global Enterprise Solutions business of the subsidiary Leonardo DRS.

The volume of new orders was rising in all the main Business areas and reflects, among other things, the acquisition of the order from the Polish Ministry of Defence regarding the AW149 helicopters for €bil. 1.4. It is worth noting that the volume of new orders is however increasing even excluding this order.

Revenues and EBITA showed a slight increase driven by the good steady performance of Helicopters and of Defence Electronics & Security, notwithstanding the impact of deconsolidation of Global Enterprise Solutions.

The increase in EBITA in the first nine months of 2022 is even more remarkable if we include in the EBITA figure for the comparative period the charges related to the COVID emergency, which had been previously recorded as non-recurring costs. It should be also noted that the net result for the first nine months of 2022 benefitted from the gain deriving from the sale of the businesses of Leonardo DRS Global Enterprise Solutions and of Advanced Acoustic Concepts as set out in section “Industrial transactions”.

Cash flows were also clearly improving compared with the same period of the previous year, in line with the expected trend of improvement.

Furthermore, the Group Net Debt figure is affected by the acquisition of the 25.1% investment in the German company Hensoldt (€mil. 606, plus related transaction costs), net of the proceeds from the sale of Global Enterprise Solutions and of the Joint Venture Advanced Acoustic Concepts (about USDmil. 470, after transaction costs).

The 2021 comparative data include the contribution from the GES business for nine months. In order to make more comparable the Group operating performance, which in relation to the first nine months of 2022 includes the contribution from this business for seven months only, below are reported a set of key performance indicators for the comparative period, excluding August and September:

(1)    EBITA and ROS have been restated to include charges related to the COVID emergency, which until the 2021 financial statements were excluded from these indicators as they were classified as 'non-recurring charges'”. 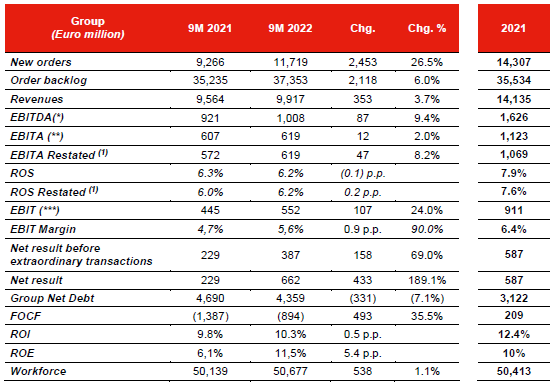 (*) EBITDA is given by EBITA, as defined below, before amortisation and depreciation (excluding amortisation of intangible assets arising from business combinations) and impairment losses (net of those relating to goodwill or classified among “non-recurring costs”).

(***) EBIT is obtained by adding to Income before tax and financial expenses (defined as earnings before “financial income and expense”, “share of profits (losses) of equity- accounted investees”, “income taxes” and “Profit (loss) from discontinued operations”) the Group’s share of profit in the results of its strategic investments (MBDA, GIE ATR, TAS, Telespazio and Hensoldt), reported in the “share of profits (losses) of equity-accounted investees”. Until 31 December 2021 this indicator included solely the part of the results of the strategic joint ventures (MBDA, GIE ATR, TAS and Telespazio) pertaining to the Group.

(1) EBITA and ROS have been restated to include charges related to the COVID emergency, which until the 2021 financial statements were excluded from these indicators as they were classified as 'non-recurring charges'”

It should be recalled that the comparison with the data for the first nine months of 2021 is affected by the lower contribution from the sale of Global Enterprise Solutions which was finalised on and effective from 1 August 2022, thus fully consolidated for the entire nine-month period in the comparative figure.

o    acquisition, completed in January 2022, of the investment in Hensoldt AG (€mil. 617, including the related transaction costs paid)
o    dividend payment in July 2022, for €mil. 78
o    the disposals finalised in July 2022 by the US subsidiary Leonardo DRS of the Global Enterprise Solutions business and of the Joint Venture Advanced Acoustic Concepts – as more amply described below – for a total amount of about USDmil. 470, after transaction costs
o    the foreign exchange negative impact