The Airshow in Hampshire has reopened its doors after four years. Leonardo's pavilion at the heart of the event.

Farnborough International Airshow brought together in Hampshire, 50 kilometres from London, the major players in the aerospace industry for the most important global industry event. The best of technology, the most innovative products, but also politics, press, academia and research from all over the world. Leonardo played a leading role, with a pavilion and a static area full of technological excellence in the name of innovation and digital, also visited during the first day by British Prime Minister Boris Johnson. 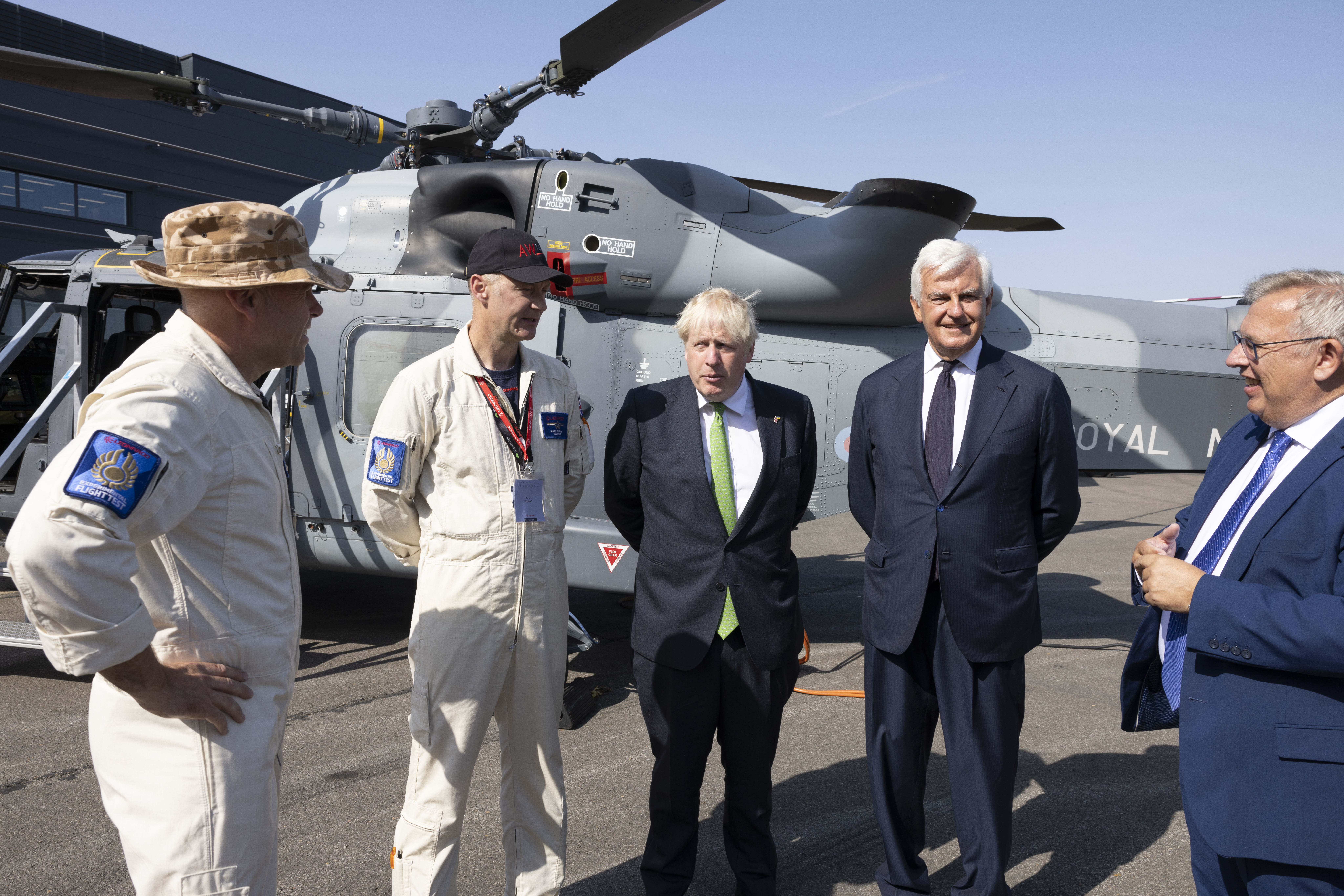 The watchword: integration
In an extremely complex international context characterised by the war in Ukraine, Leonardo CEO Alessandro Profumo said that while it is true that the conflict is leading all countries to invest more in defence, 'we do not need to spend more, but spend better: we need more European programmes to aim for European convergence'. To this end, 'closer EU coordination on procurement is needed'. Cooperative examples do exist: 'the Eurodrone for instance is starting up, but I am sure that others will be there. 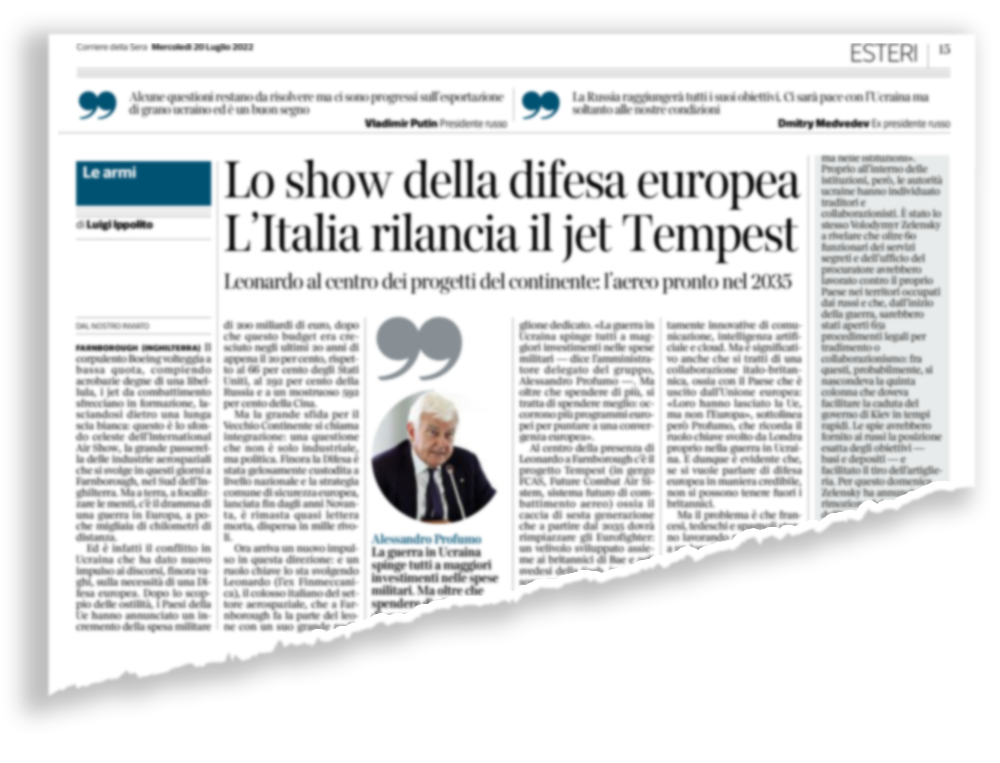 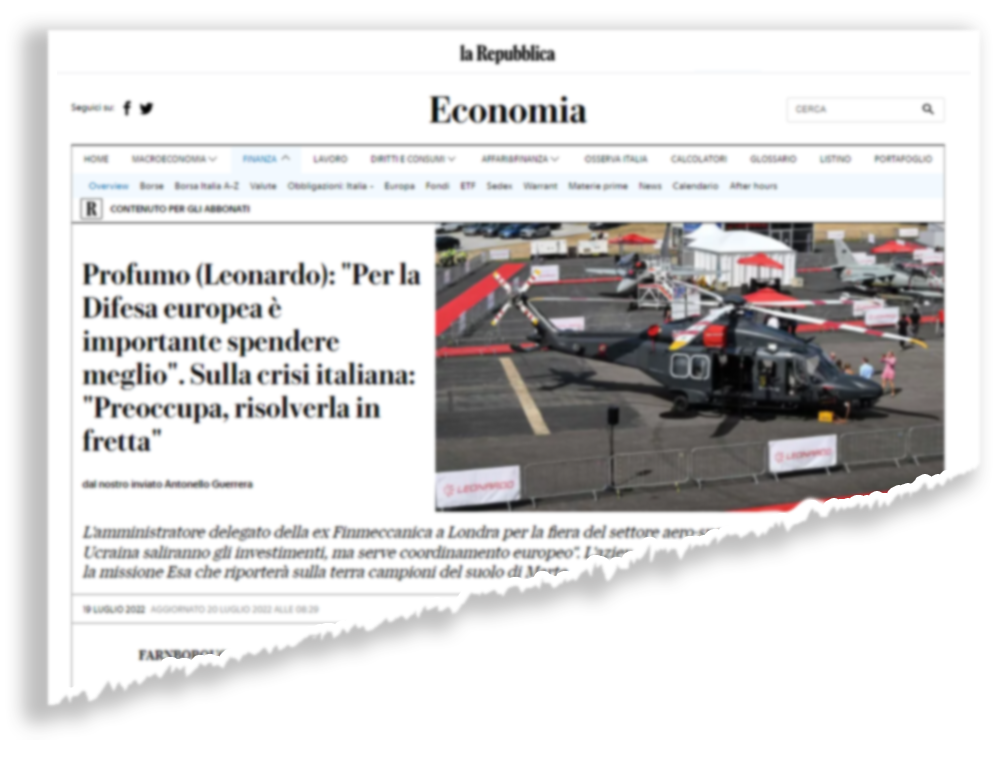 The great Farnborough Airshow reopened its doors four years after the last edition. “Leonardo has changed profoundly. The company is transforming itself according to the strategic objectives of the Be Tomorrow - Leonardo 2030 plan” added the CEO speaking to journalists at the press conference.  “The company's objective is to strengthen the core business, evolving from a digital point of view to seize new opportunities and driving the development of new technological solutions”. 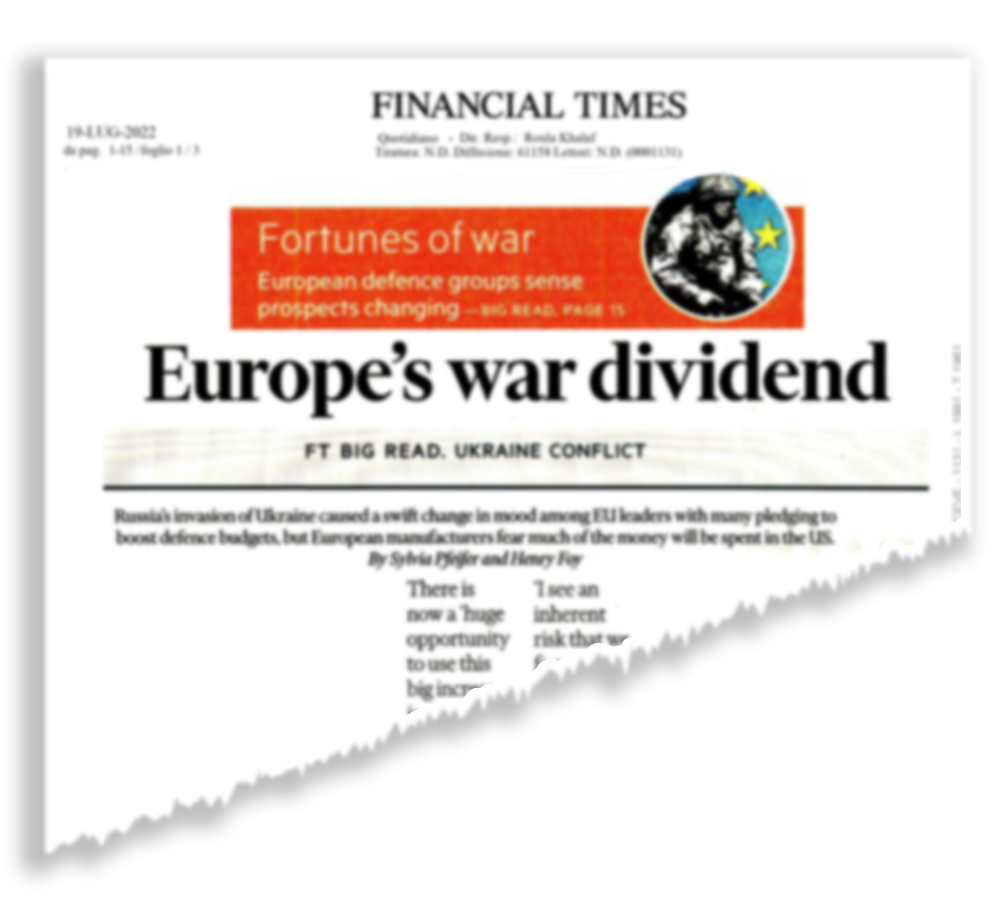 The FCAS programme and the sixth-generation system

At the centre of Leonardo's presence at FIA2022, the Future Combat Air System (FCAS): designed to guarantee the safeguarding of national sovereignty in the Combat Air sector, this system of systems is characterised by the possibility of operating multi-domain missions, including the Space and Cyber environment, thanks to its ability to collect, analyse and process - in the cloud - data from all available platforms, both integral parts of the FCAS system and external ones. Leonardo aims to be at the forefront of the development of enabling technologies for this programme, thanks to its advanced capabilities in providing solutions for all five domains in which FCAS will operate, and to the role the company plays in major international aeronautical partnerships, such as the Eurofighter Typhoon, the F-35 and the Eurodrone. 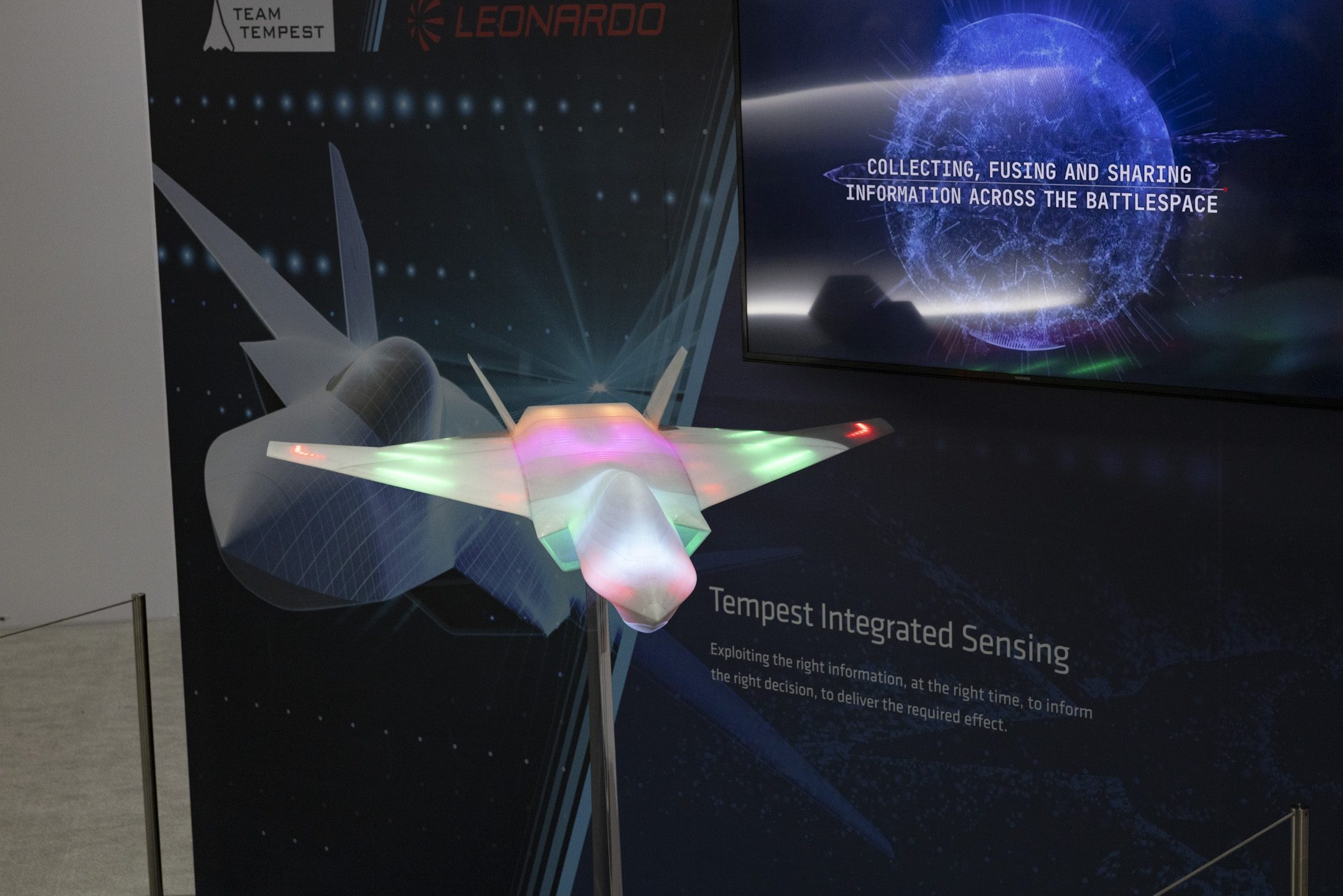 During the show, Leonardo and BAE System announced the industrial collaboration for the demonstrator aircraft, which will be used to study the key elements of the so-called core platform, in response to the requirements being defined by the armed forces. A programme that, despite Brexit, sees Italy and the UK collaborating on two levels: Leonardo is in fact the only company taking part both at Lead System Integrator level in Italy - also coordinating Elettronica SpA, MBDA Italy and Avio Aereo - and as Lead Sub System Integrator in the UK, as a member of Team Tempest, which includes, in addition to BAE Systems, also MBDA UK and Rolls Royce. 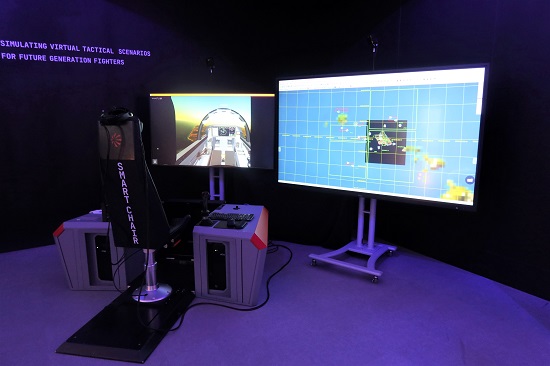 Leader in the trainer sector with over 2,000 units sold in 40 countries, Leonardo brought its flagship products to the Farnborough International Airshow: the M-346, a latest-generation jet for the pre-operational training of fighter pilots, and the light attack version of the M-345, a jet capable of performing operational roles in addition to training student pilots. Also exhibited at the stand was the SMART CHAIR, a real novelty for the sector, a tactical scenario simulator demonstrator for the future generation of fighters, where only the stick and throttle remain 'traditional and physical', and where everything is immersive, virtual and augmented. At the pilot's disposal is a new, completely synthetic system, which is projected directly into the pilot's helmet. Commands are thus given with eye movements, and the layout is very simple and intuitive, calibrated to the need to reduce the workload of the pilot who will have to contribute to the future system of systems.

While Samantha Cristoforetti was preparing to be the first European astronaut to perform a spacewalk, two very important contracts were announced at Farnborough. In evidence was the robotic arm, built by Leonardo to take samples of the soil of Mars back to Earth and thus be able to study the red planet in the laboratory. Delivered and launched in 2028, it should start working on the Martian surface in 2031 and take soil samples directly from NASA's Perseverance rover. The arm, 2.5 m long and the result of the best of technological research in the robotic, electronic and space fields, will be built by Leonardo on the basis of a contract signed at Farnborough with the European Space Agency (ESA) that is part of the Mars Sample Return programme, led by NASA in collaboration with ESA itself. 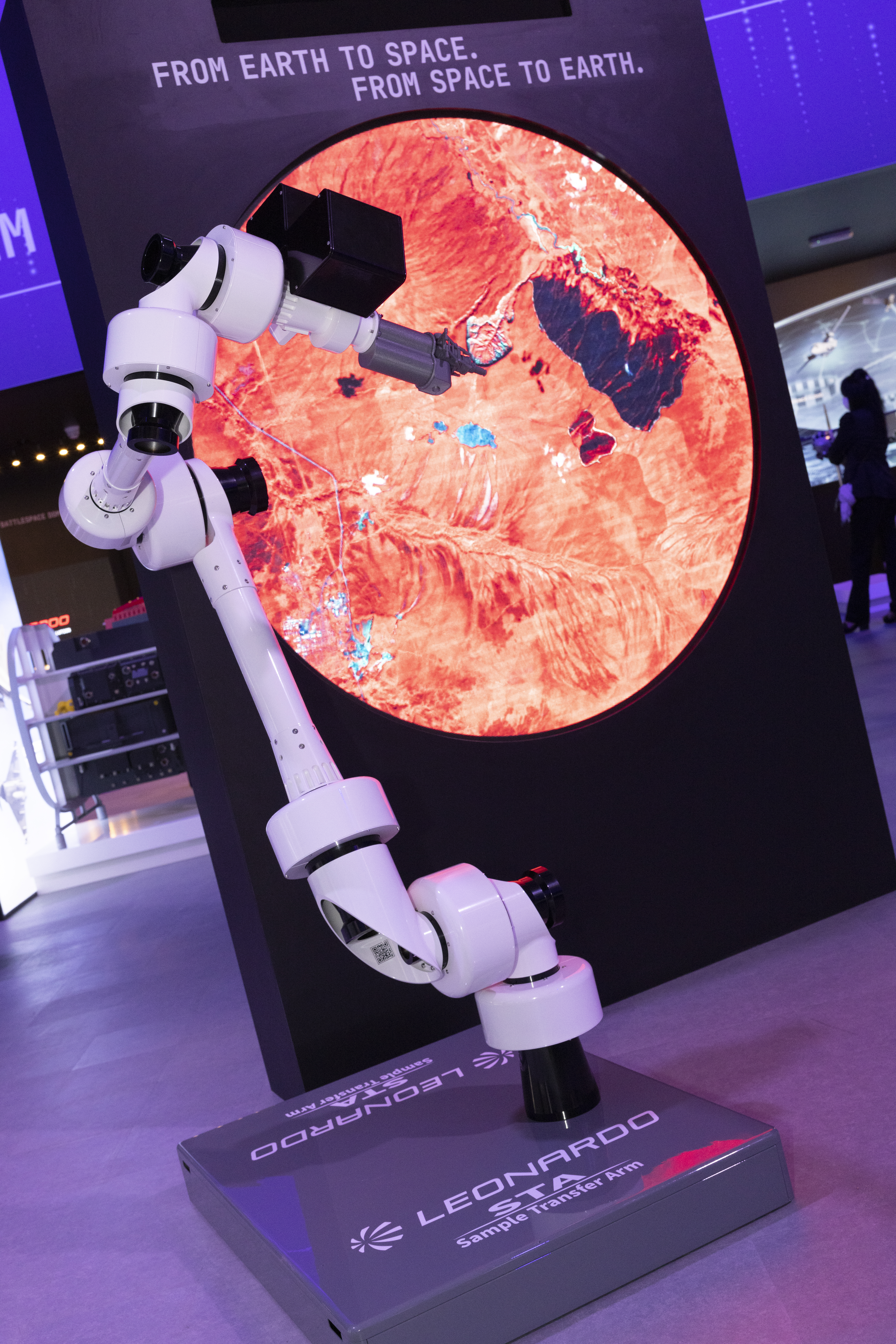 If Mars will be the new technological frontier, the Moon has been the subject of the signing between Telespazio (joint venture between Leonardo, 67%, and Thales, 33%) and Inmarsat, to create the communication and navigation services for the next lunar missions. Space technologies and services are on the other hand fundamental for monitoring the health of our planet, providing innovative services to citizens and increasing knowledge of the universe. This is the backdrop to the Space Alliance, a partnership between Leonardo and Thales, which unveiled plans at FIA 2022 to boost the UK's space sector even further.

At the heart of vertical aerial mobility

Innovation and global commercial leadership mark Leonardo's rotary wing platforms, which caught the attention of industry players in Hampshire. Also on show was the latest generation AW149 multi-mission helicopter, fresh from its success in Poland with 32 units ordered by the Polish Armed Forces, an ideal candidate for the UK's New Medium Helicopter requirement. While the number of partners supporting Leonardo's proposal is growing, the industrialisation of the product in Yeovil has begun in order to allow, if selected, a significant reduction in industrial risk and cost and a faster introduction into service.

Commercial agreements were celebrated at Farnborough on helicopters to be used for missions in the emergency medical services (EMS) and VIP transport. From the AW169 to the AW109 GrandNew to the global technical support programme for major operator Bristow on its AW139 and AW189 offshore, Leonardo showcased the safety and benefits of its latest-generation helicopter family, confirming its leadership from platform design, through the operational phase to technical support and training. The present, but also the future of vertical take-off and landing (VTOL) solutions, with the contract awarded to Leonardo by the UK Ministry of Defence for the third phase of development of the Rotary Wing Uncrewed Air System (RWUAS) Proteus technology demonstrator.

At the forefront of today's and tomorrow's radar technologies 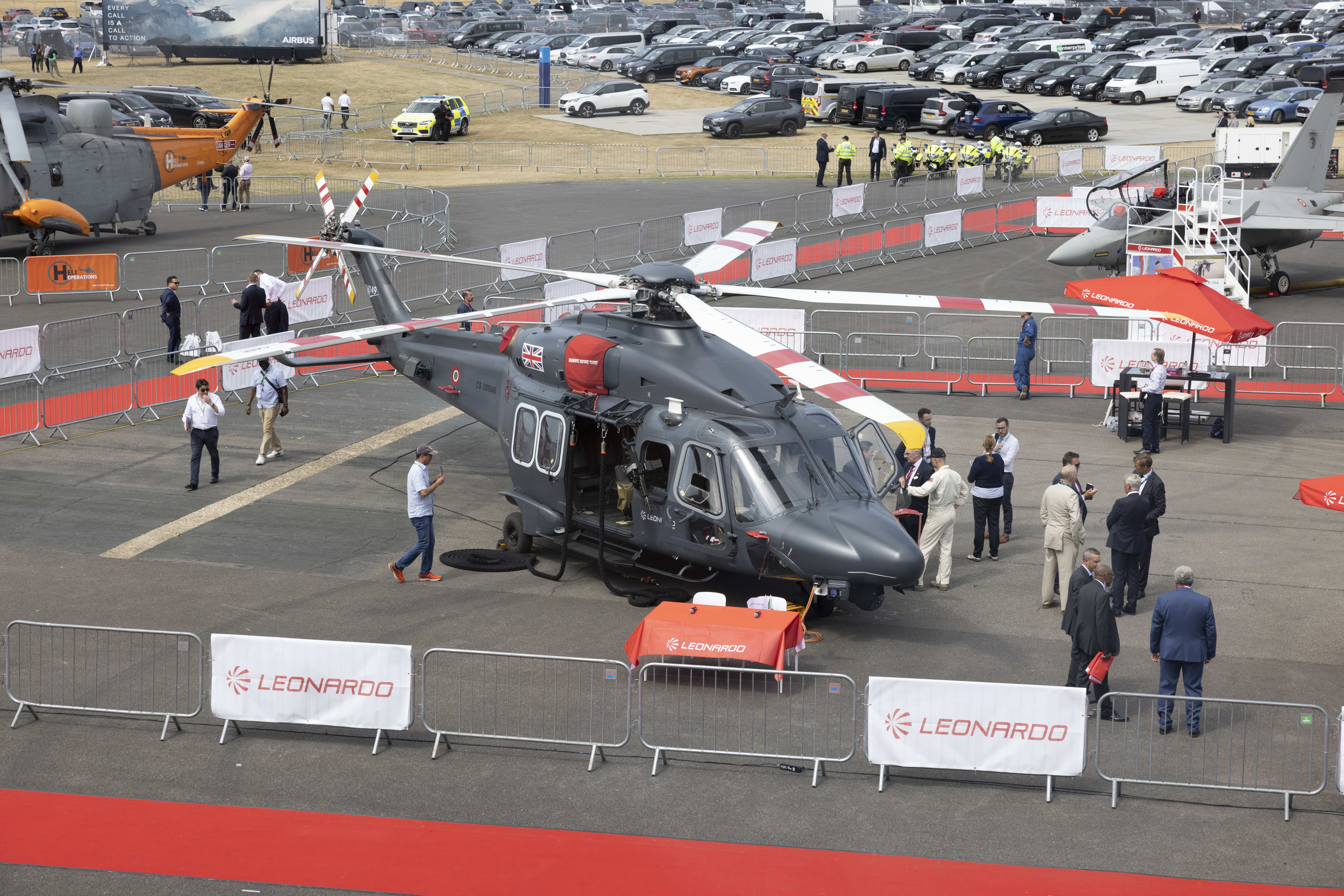 At Farnborough Leonardo set its positioning targets in all the Group's core sectors, including Electronics. Numerous cutting-edge technologies were on display, and significant agreements were signed during the days of the airshow. These include the order by the Greek Air Force of the Kronos Grand Mobile High Power, a multifunctional radar designed for air and sea surveillance and defence. Also in the radar field, the Leonardo UK subsidiary announced that it had reached an agreement with Mitsubishi Electric on the concept for the JAGUAR radar technology demonstrator, the first big building block of an international radar programme that meets the ambitions laid out by Japan and the UK as part of sixth generation fighter aircraft programmes.

This success comes on top of the contract signed a few days earlier in the UK for the integration of Leonardo's newly developed electronically scanned radar, the European Common Radar System Mark 2 (ECRS Mk2) on part of the Royal Air Force's Tranche 3 Typhoons. 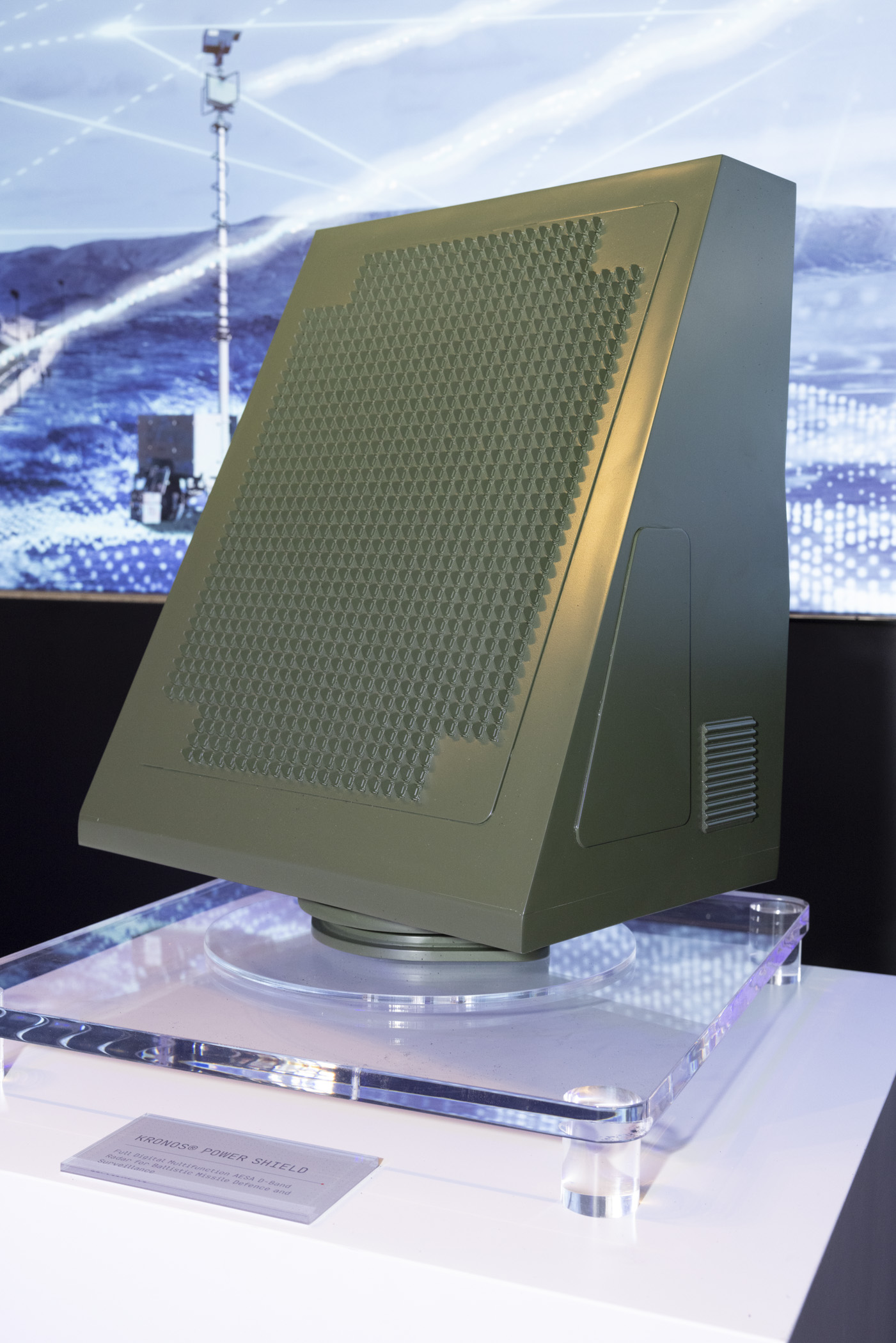 Still in the field of new electronic technologies, the LOAM-V2 dual-use self-protection system was presented in London. This radar is capable of detecting small obstacles along the route and provides the pilot with maximum situational awareness in various flight conditions.

The growth of regional aircraft

ATR’s new 20-year global market forecast, disclosed at the show, demonstrates that essential connectivity benefits not only emerging markets but also mature economies. The company, a joint venture between Airbus and Leonardo, signed new agreements and secured new orders at the Farnborough International Airshow. ATR secured new orders from Japan's ORC and Gabon's Afrijet, which selected the ATR 42-600 and ATR 72-600 respectively as the lowest CO2 emission and most economical regional aircraft on the market. ATR continues to expand its presence in Japan as Feel Air is looking to operate a fleet of up to 36 ATR aircraft and new lessor Abelo is to acquire 20 aircraft, including 10 ATR 42-600S - the Short Take-Off and Landing version.

Visit the focus on Farnborough Airshow 2022