The JANUS telescope for the European Space Agency (ESA) JUICE (JUpiter ICy moons Explorer) mission has been delivered today to the Italian Space Agency (ASI) and it is ready to be sent to France for some final tests before being integrated in the probe. Produced by Leonardo under the responsibility of ASI, with contribution and scientific guidance from Parthenope University of Naples and the National Astrophysics Institute (INAF), the telescope will soon join MAJIS, the Moons and Jupiter Imaging Spectrometer that was delivered earlier this summer. The ASI-funded MAJIS was also built by Leonardo with the INAF providing the scientific supervision.

The two instruments produced at Leonardo’s plant in Campi Bisenzio (Florence) will perform a series of important scientific tasks and play a crucial role in studying Jupiter and its three icy moons (Ganymede, Europa and Callisto), adding to our knowledge of the giant planet and our solar system as a whole.

The JUICE mission, scheduled for 2023, is the first mission in the ESA “Cosmic Vision” programme. Following its launch, it will take seven years to reach Jupiter and its moons; it will remain in the orbit of the gas giant for at least three years, during which detailed observations of the planet and its natural satellites will be conducted. This will allow the international scientific community to develop more precise theories about the conditions in effect when the planets formed and the processes leading to the origins of life. Ganymede, for example, is so big it might be considered a nano-planet, with very unusual features such as the presence of a thin atmosphere abounding in oxygen and underground oceans, which could potentially contain life forms. It is also the only moon in the solar system to have its own magnetic field. All this makes it fascinating to the scientific community.

“We are going back to Jupiter with technologically advanced instrumentation,” explains Enrico Suetta, Leonardo’s VP CTO & Capability Space. “Following the success of NASA’s ‘JUNO’ mission with our JIRAM camera on-board, today, after the MAJIS spectrometer, the JANUS telescope for the ESA ‘JUICE’ mission is leaving our plant in Campi Bisenzio to perform the final tests in external laboratories and to be integrated with the probe. We’re very proud of our electro-optical sensors, which are contributing more and more to the study and knowledge of our solar system and the universe.”

JANUS, a high resolution optic chamber with 13 spectral bands, will contribute to the study of the moons’ morphology and geological processes, in order to investigate their potential habitability. Furthermore, it will probe the outer layers of Jupiter’s atmosphere, acquiring high definition colour images of clouds, vortexes and waves. JANUS will also perform the important task of generating valuable information in the form of images, which will provide context for the other instruments involved in the mission. JANUS will be capable of viewing about 7.5m per pixel on Ganymede and 15km per pixel on Jupiter, which is distanced further away. The greatest challenge for the engineers was constructing an extremely compact, lightweight instrument that could maintain high levels of performance, as well as withstand the adverse environmental conditions of space and the strong radiation of Jupiter, which could cause critical interference with electronic components and optical elements.
Leonardo is the industrial leader for the entire instrument with the subsystems’ contribution from DLR of Berlin, CSIC-IAA of Granada, and CEI-Open University of Milton Keynes. In particular, Leonardo manufactured the optics and integrated the focal plane and the entire instrument.
The project has been mainly funded by the Italian, German, English Space Agencies (ASI, DLR and UKSA) and the Spanish Ministry of Research.  The scientific team, led by the Parthenope University of Naples, comprises international researchers and institutes - including INAF/IAPS and CISAS as well as those mentioned above, – proposed the payload and followed the project in all its phases.

“Working on JANUS represented a major challenge,” commented Iacopo Ficai Veltroni, in charge of Leonardo’s space spectrometers.  “Though the instrument itself might look like all the others made in Campi Bisenzio, the performance requirements for this high-definition camera, combined with the size and mass limits imposed by the project, are very hard to achieve. JANUS’s optical head weighs less than 12kg, and its telescope is the size of an ordinary piece of A4 paper. The construction of the MAJIS spectrometer was also complicated, as it has three articulated dynamic mechanisms for turning the mirrors and an advanced cooling system to ensure the temperatures required for infrared technologies to function.”

MAJIS is a spectrometer for the visible and infrared (near and medium) spectrum. The instrument is under French guidance but was built under a bilateral agreement between ASI and the French Space Agency, CNES. Leonardo in Campi Bisenzio built the instrument’s heart: the spectrometer capable of observing and characterising clouds, ice and minerals on the surface of Jupiter’s moons. MAJIS is the main instrument of the mission that will determine the composition of the surfaces observed. It will also study the vertical distribution of water and ammonia, the greatest contributors of oxygen and nitrogen to the chemistry of the atmosphere. 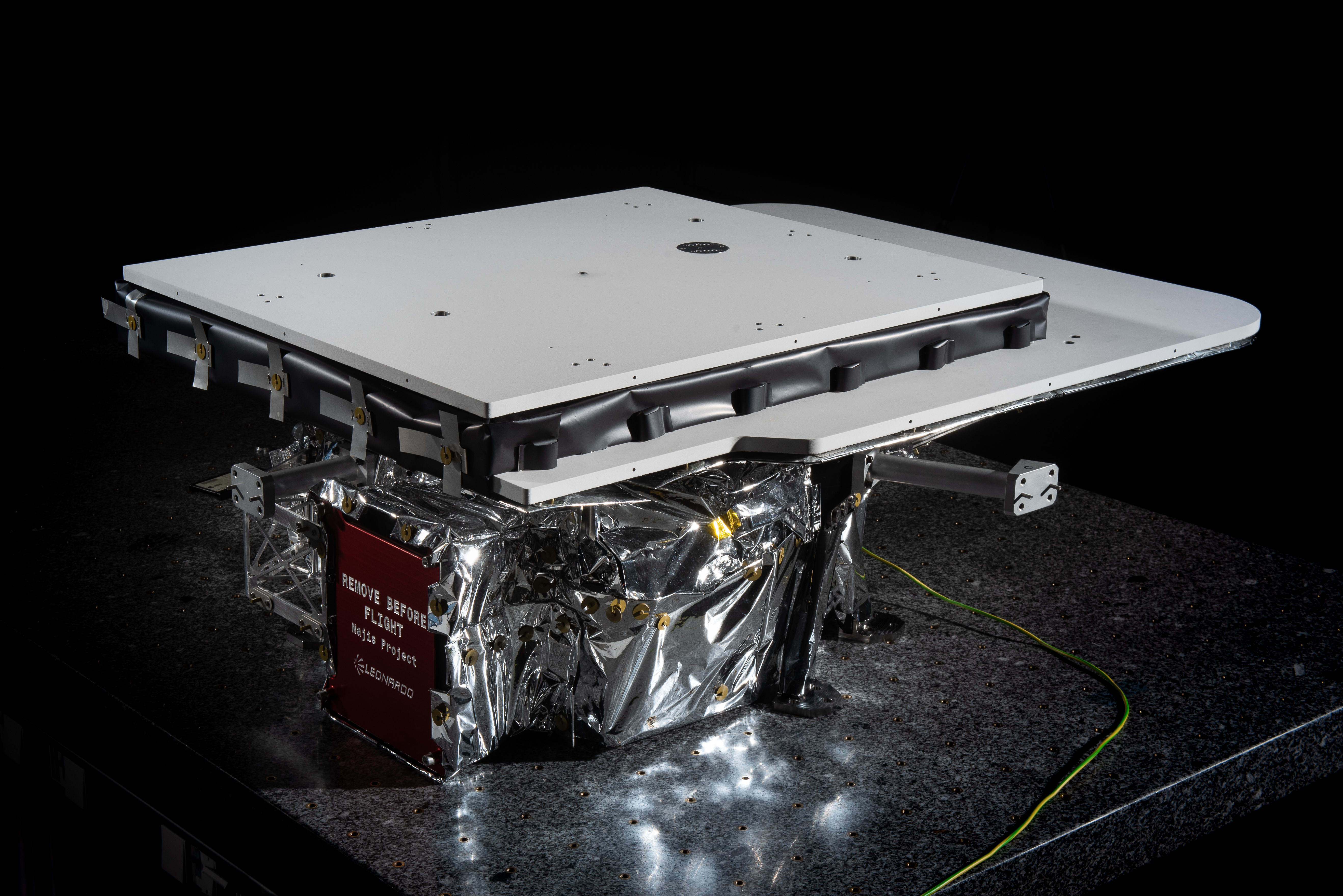 Construction of the MAJIS spectrometer and telescope represented a major challenge for the engineers, as the instrument is fitted with particularly complex systems: three dynamic mechanisms for rotating the mirrors and an advanced cooling system. The cooling system – created by Leonardo with the support of the joint venture Thales Alenia Space– must ensure very low temperatures (down to -190°C) for the optics and focal plane, which, as infrared technologies, must be cooled to cryogenic temperatures in order to function correctly.

In addition to the two instruments being delivered by Leonardo, Thales Alenia Space is also responsible for development, construction and testing of the JUICE probe’s RIME, an instrument essential to mission’s success, due to its ability to detect the internal structure of layers of ice. Using a 16m antenna made by Space Tech GmbH for Airbus Defence and Space, with a central frequency of 9 MHz, RIME can penetrate up to 9km below the surface of the ice, with a vertical resolution of up to 30m in ice, covering the structure below the Oceans of Ganymede, Callisto and Europa. Radar development was funded by ASI, while Trento University is in charge of the project’s scientific aspects. RIME also includes a contribution from NASA.

In support of the JUICE mission, Leonardo also built the biggest photovoltaic generator ever created for an interplanetary mission. With a surface area of 85 square metres, it will supply the necessary electricity at a distance of more than 750 million kilometres from the Sun, where temperatures reach -230°C. Constant generation of electricity is an essential requirement, without which the mission would be unable to achieve its scientific goals. 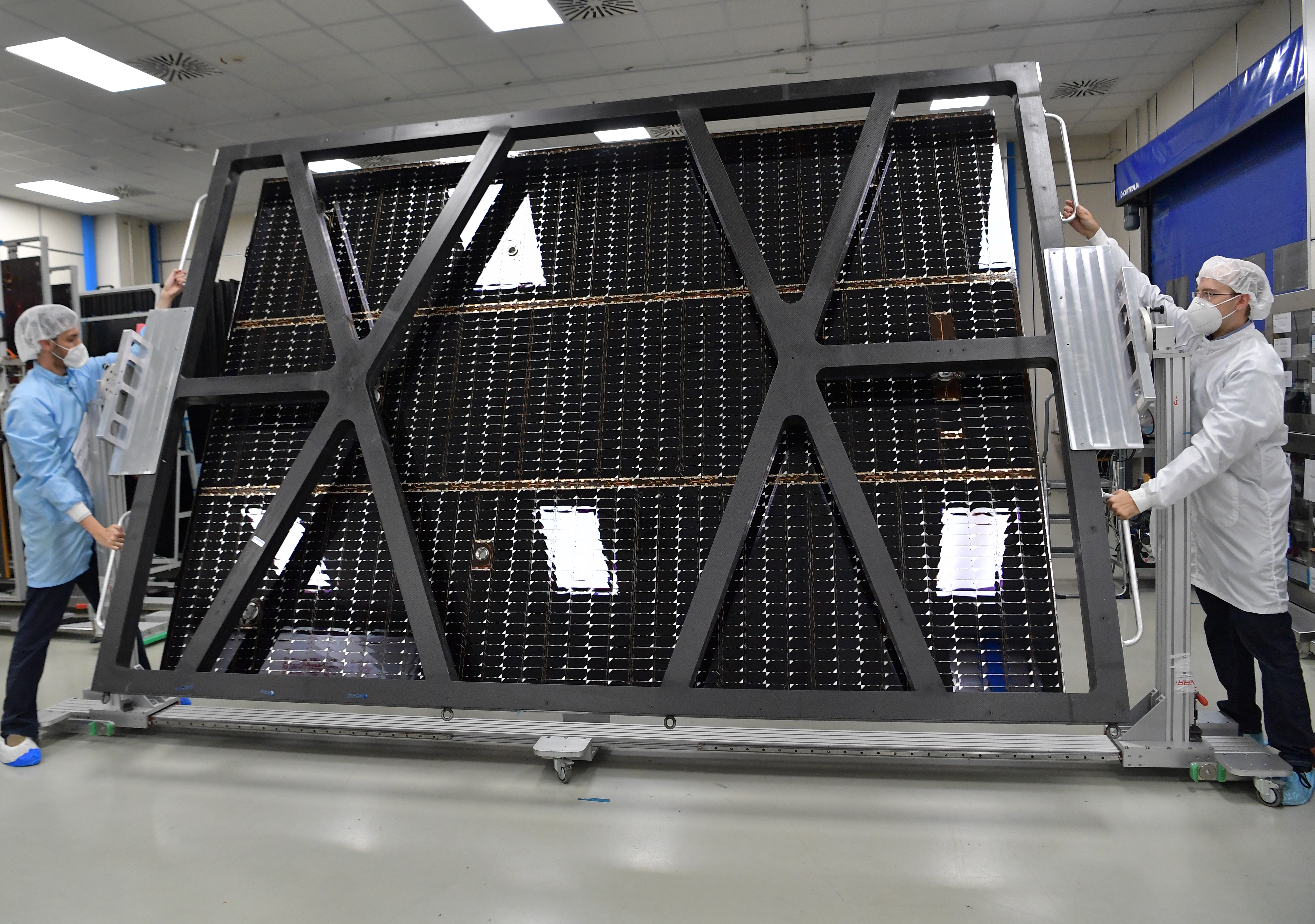