Monitoring glaciers from Space to mitigate the effects of climate change

28 October 2021
We spoke to Luca Pietranera, Head of Product Development and Innovative Services at e-GEOS.
Share

The October edition of the 2021 Telespazio and e-GEOS calendar, Love Planet Earth, brings us to the Svalbard Islands, in the Arctic Ocean, through satellite shots and National Geographic photos, to help us understand the fundamental role of satellites in the protection of the Arctic and the delicate balance on which it stands.

Increasing the global response to address the climate emergency through a just and equitable transition is now a priority on the agendas of governments around the world. The theme is at the centre of the UN COP26 (Conference of the Parties), which brings together 197 nations in Glasgow (31 October – 12 November 2021) to assess the current state of climate change, in line with the sustainable development goals (SDGs) of the 2030 Agenda. In the same spirit, our exploration of Leonardo’s satellite technology and its use continues through the Telespazio and e-GEOS 2021 Love Planet Earth calendar that, during October, focuses on monitoring glaciers, a crucial factor – linked to the fight against global warming – that is highly relevant to the UN 2030 Agenda SDG 13: Climate Action. 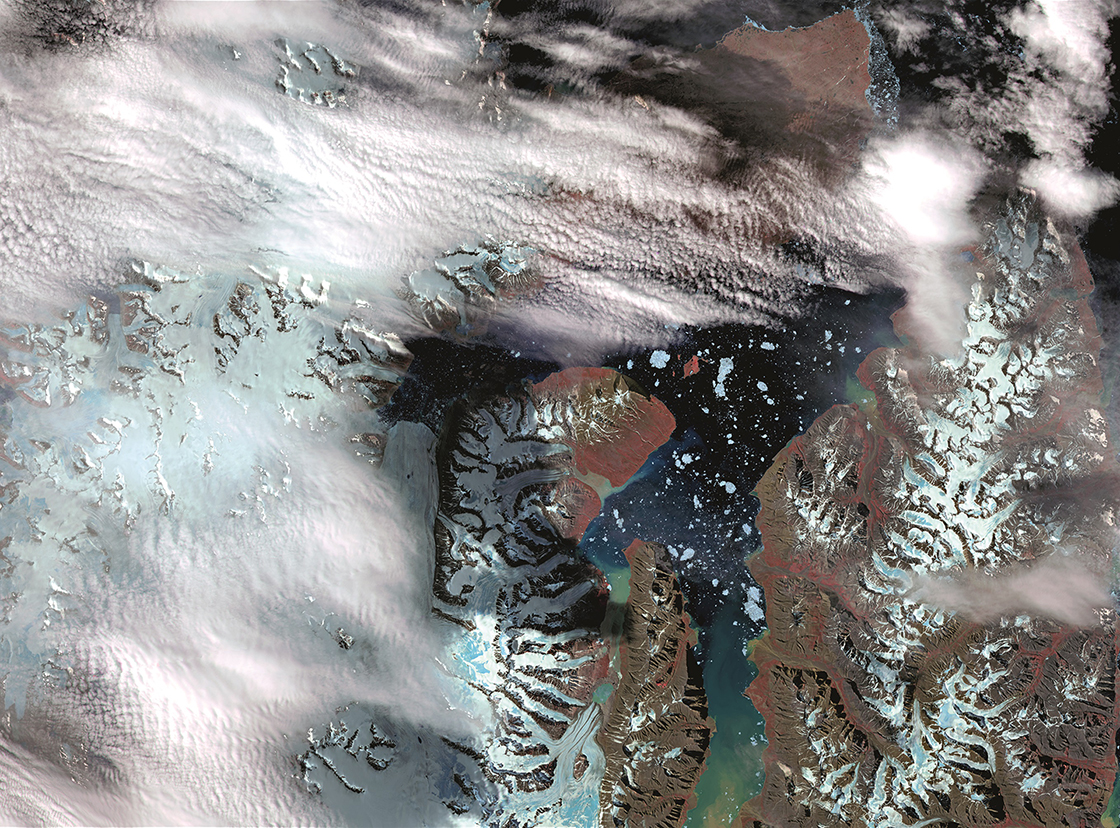 The Svalbard Islands are in the Arctic Ocean. The satellite image provided by Sentinel-2 shows us an area in the northwest of the archipelago where you can see every state of the hydrosphere: water, ice and clouds. The National Geographic photo shows an old water pipeline near Ny-Ålesund on the Svalbard Islands, deformed by subsidence caused by the melting of permafrost that threatens its stability. Space technology makes a fundamental contribution to the protection of the Arctic and the delicate balance it relies on. Leonardo plays an important role in international programmes dedicated to the region, through satellite manufacturing alongside Thales Alenia Space, in data acquisition, services and applications with Telespazio and e-GEOS, and through developing sensors – the “eyes” of the satellites – many of which are created in Leonardo’s laboratories.

Developing the potential of space technologies to support sustainable development is one of the pillars of the Be Tomorrow – Leonardo 2030 strategic plan and of Leonardo’s Sustainability Plan.

We spoke about it with Luca Pietranera, Head of Product Development and Innovative Services at e-GEOS. 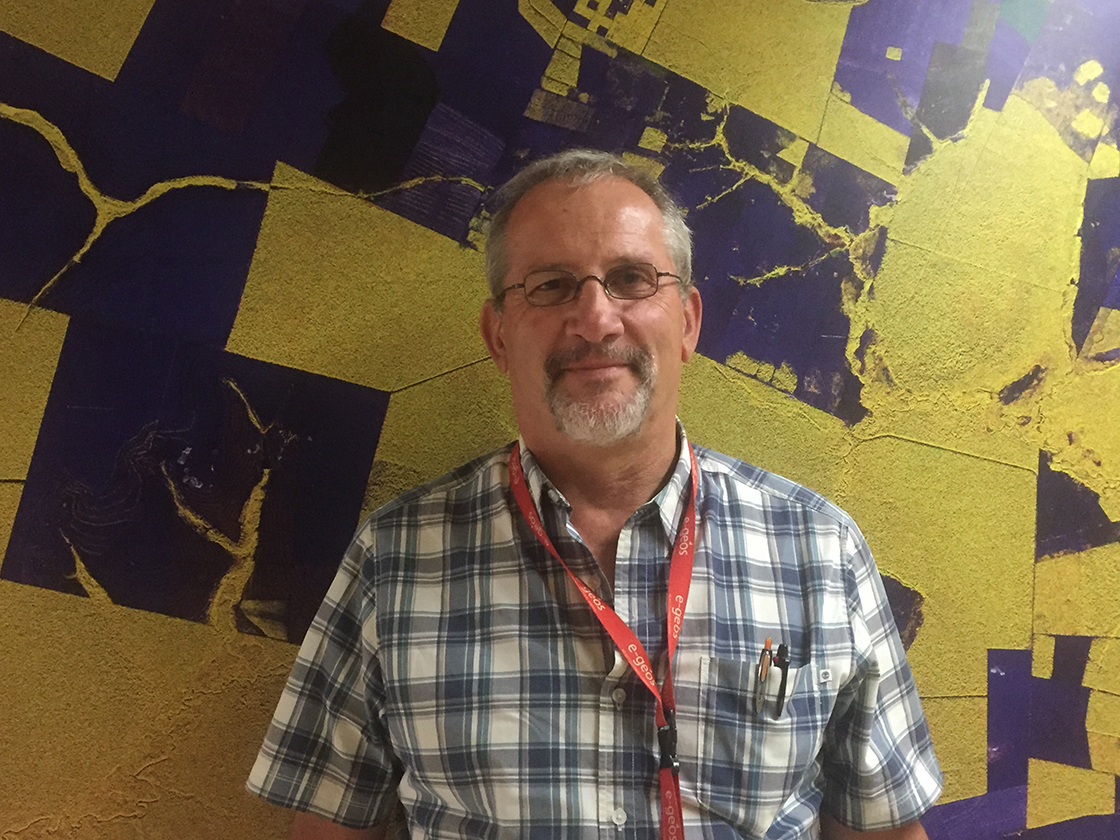 What can satellites do to monitor the melting of glaciers and the cryosphere in general?

For several decades, satellites have allowed us not only to provide a continuous picture of ice coverage, but also to identify cycles and multi-year trends of variation, separating them from seasonal variations. We're talking about the Arctic and Antarctica, boundless environments that we can understand in detail thanks to satellites' "eyes" that can monitor, both totally and impartially, areas that are difficult to access by land. Numerous satellite systems have been monitoring the cryosphere since the 1970s, starting with microwave radiometers installed on various satellites that measure the sea ice in the Arctic on a daily basis, reporting its drastic reduction (from a summer low of almost 9 million square kilometers in the 1970s to about 6 million in recent years). Not to mention the most sophisticated altimeters of the NASA-IceSAT and ESA-CryoSAT missions that – with different radar and laser technologies – measure the thickness of both sea ice (Arctic) and land ice caps (Antarctica and Greenland) on a monthly basis, enabling us to evaluate how melting ice has contributed to rising ocean levels.

What makes e-GEOS services stand out?

Although climate change is a global phenomenon, its effects are distributed differently on the surface of our planet. In general, for the Arctic regions, we speak of Arctic Amplification, including a greater sensitivity of the Arctic to the main factors of climate change (such as the concentration of greenhouse gases), which results in a growth of the average temperature at a rate approximately double that of the global average. Similarly, there are some relatively small areas of the planet that influence climate change at the global level. An example is the Fram Strait area, the passage between the Svalbard archipelago and Greenland. Through this area, only a few hundred kilometers wide, passes all the Arctic ice that flows into the North Atlantic Ocean. Variations in this ice flow have a dramatic influence on the global climate as they contribute to rising sea levels and the decrease in ocean salinity, with a significant impact on the delicate balance that regulates global circulation, such as currents like the Gulf Stream. And this is where e-GEOS comes in, developing solutions for the in-depth and frequent monitoring of these critical areas, through the use of the Italian satellite constellation COSMO-SkyMed, owned by the Italian Space Agency and the Ministry of Defence. For nearly five years, the Fram Strait has been observed twice a day, documenting the variations in time and highlighting the close connections between the different ecosystems (atmosphere and sea). Another effect is the one associated with the National Geographic photo; the melting of permafrost – the layer of permanently frozen ground that is found no less than a few metres deep in the subsoil of various areas at high latitude or high altitude. Here, e-GEOS can map greenhouse gases (particularly methane) released by the thawing permafrost through the use of the European ESA Sentinel-5P mission. Likewise, the COSMO-SkyMed radar satellites can measure ground displacements by the centimetre, if not by the millimetre, providing a fundamental tool for monitoring infrastructures and urban areas (such as Yellowknife in northern Canada or many cities and industrial plants in Siberia) which are subject to subsidence and land instability caused by thawing permafrost.

What else can this satellite data be used for?

As a side effect of global warming and the shrinking of the Arctic ice cap, the Northern Seas are becoming increasingly easier to sail, making it important to provide satellite support for this new route, both in terms of safety and monitoring environmental phenomena that occur there.

e-GEOS recently supported a scientific mission of the Italian Navy sailing in Arctic waters north of the Svalbard archipelago, while two years ago, we provided similar support to an Italian sailor who sailed the Arctic route from Japan to Norway using our solutions. In both these examples, satellite data – acquired at very short intervals in the areas the boat was expected to arrive in the next 24/48 hours – was used to predict the environmental dynamics along the route, as well as the number of icebergs present, their movement and direction. All this is done through the platforms and services offered by e-GEOS using satellite applications that can provide this information in an accurate and timely manner.

As climate change is influenced by multiple factors, the more we develop long-term monitoring trends, the greater the possibility of accurately predicting and extrapolating what will happen in the future through predictive and preventive logics. At the same time, technological evolution provides us with increasingly sophisticated and accurate solutions. For example, the recently launched Sentinel-6 satellite will provide us with very precise measurements of sea level and its variations, not only in the open sea, but also close to the coast, where the effect of global climate change interacts with local dynamics (such as tides) with impact ranging from the general rising sea level to coastal erosion.

Lastly, it’s important to note that satellites can monitor any point on Earth, so the same solutions to monitor Arctic ice can help formulate predictive analysis in multiple fields, such as agricultural crops. For countries such as China, Japan and Thailand that base parts of their economies on rice, this is crucial; satellite monitoring makes it possible to formulate increasingly accurate predictive models of harvests, months before they occur, through the use of images and data.

For more information on Earth observation technologies and solutions, read our other interviews.