19 March 2021
We discuss this with Domenico Grandoni, Head of Big Data, Analytics & Artificial Intelligence Solutions Competence Centre at e-GEOS, tells us more about this platform.
Share

Responsible consumption and production is the central theme of the March images in the Telespazio and e-GEOS “Love Planet Earth” 2021 calendar produced in partnership with National Geographic Italia. Together we discover what satellites can do for these sustainability issues, and Leonardo's contribution through the activities of e-GEOS (Telespazio/ASI).

A city crossed by a river – the Buriganga – part of an extensive river system that covers an entire region. We’re in Dhaka, the capital of Bangladesh, a megalopolis inextricably linked to the water. We are in the month of March, which has the theme of “responsible consumption and production”. At the centre it features an image captured by Sentinel-2, processed by e-GEOS (80% Telespazio and 20% ASI) and showing the large water courses that cross Dhaka. 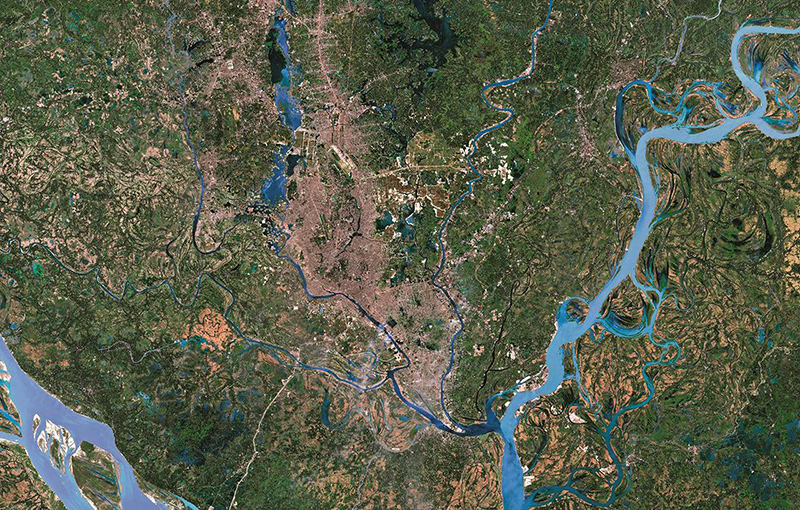 The image appears alongside a National Geographic photograph of a man diligently drying plastic sheets that will be sold for recycling. This is a small step towards the virtuous mechanisms that need to be triggered in an area of the world where the high production of refuse and its disposal is one of the capital city’s major environmental problems. Satellite observation, and particularly the processing of the data associated with it, is of crucial importance along the path to achieving sustainability targets. The leading role, in this case, is played by technology supplied by CLEOS (Cloud Earth Observation Services), a digital platform for the development and marketing of geoinformation products and services for small and medium-sized enterprises and start-ups, implemented by e-GEOS. 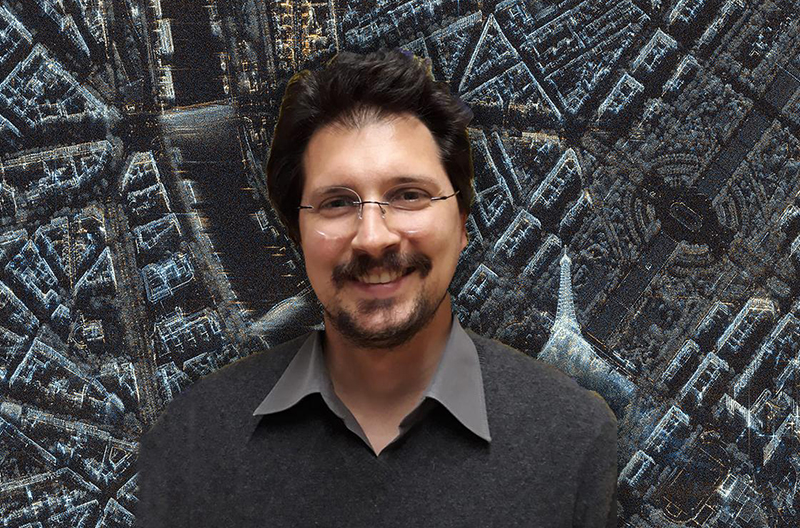 What can satellites do to help address sustainability issues?

Institutional and commercial satellite missions collect a huge amount of data every day. They enable – in many cases on a global scale – the monitoring, observation and measurement of many phenomena including the consequences of natural disasters. Satellites also support the activities of civil protection and humanitarian organisations, and enable pre- and post-monitoring of the situation when new infrastructure is built.

In reaching the Sustainable Development Goals (SDGs) of the UN's Agenda 2030 – such as the sustainable management of soil, water resources, forests and cities – a key aspect is objectively measuring the indicators that emerge once they have been defined and articulated. This calls for objective parameters since, being global initiatives, comparisons must be as uniform as possible. Satellites therefore make a key contribution because, via one single observation point they offer a measure of the variables and phenomena that we want to observe – i.e. global, objective and transferable from one point of the planet to another – in order to correlate them with sustainability indicators. This requires the ability to store and analyse enormous volumes of data calls for a technological infrastructure and Artificial Intelligence techniques to draw insights and information from the data.

What are the distinctive features and advantages of the CLEOS platform?

The CLEOS platform enables the collection and analysis of satellite Big Data. Using Artificial Intelligence techniques makes it possible to extract Big Data Analytics and information at different thematic levels. Information is made accessible to end-users in a simple and targeted way. CLEOS enables users such as researchers, SMEs, start-ups and innovative companies to create complex analyses, condensing thousands of terabytes of geospatial data into an ‘actionable report’: a considerable acceleration and optimisation of the whole task. CLEOS is intrinsically flexible and, as well as offering a state-of-the-art Development Portal, also supplies geospatial products and content through its digital marketplace – also the gateway to the Application Platforms of e-GEOS.

What other uses are there for CLEOS?

The CLEOS platform is used to process large quantities of satellite data but could also be used in other contexts, such as for those needing a flexible platform for generating analytics from data that is not necessarily satellite-based. CLEOS can also be used to build a climate analysis model. In the same way, there is nothing to prevent socio-economic analyses from being carried out using the tools offered by CLEOS, such as for building pipelines or processing data. The platform essentially helps create models based on the Digital Twin concept – the digital replication of a piece of equipment, a natural phenomenon or an environment – predicting evolutions and changes over time and observing all the details involved. Digital Twin output provides a scenario in which decision-makers can make informed decisions through a ‘data-driven’ approach. The essential element of a Digital Twin is the data, which must arrive continuously from sources (also including IoT, in situ sensors and social media) that can observe and measure the variables relating to the phenomenon being observed.

For further information on Earth observation technologies and solutions, also read the other interviews.