Leonardo leader of the EU security cluster: in an interview with Repubblica, CEO Profumo brings up the subject of a common European Defence

Alessandro Profumo advocates the defence industrial alliance project and proposes Leonardo as the leader in security electronics. Leonardo's CEO takes stock of the group's achievements and looks forward to strengthening its collaboration with Fincantieri

In an interview with La Repubblica, Alessandro Profumo, the CEO of Leonardo, summed up the company’s position in Europe and the world, explaining the need for everyone to work together to create a European defence unit.

“The United States is a crucial market. But it’s not the only one. So is Europe, starting with Germany. We’re present in nearly every East European country, while in France, which remains the most difficult market to enter, we work with companies such as Thales and Airbus. Italy accounts for only 15 per cent of our turnover, but it’s extremely important because it’s where we research and develop our products. It’s the same for all companies in the sector, where average domestic demand is much lower than in the United States.”

The CEO then discussed the importance of supporting the European defence project: “I think it’s imperative to work towards a Europe-wide defence, and I say this, especially for the public. Whatever new system you develop will have non-recurring costs. If you develop a new product ten times, instead of once or twice, these costs are multiplied by ten. People always mention the case of armoured vehicles: Europe has 17 different types, whereas the United States has only three, of higher quality and lower costs. This is the people’s money that could be used differently. But we’ll get there in Europe too.”

“Everyone realises the importance of thinking on a European scale,” continued Profumo, “but at the same time, it’s important for a strong foundation of Italian intellectual property. I’ve always had two things to say on this subject. The first is that mergers will take place vertically. Secondly: as Italians, we must identify the capabilities we need to protect. We have excellence in defence systems, with OTO Melara, in electronics, helicopters, and trainers, which allow us to grow. I’m very proud of one thing: since I’ve been here, we’ve created five thousand jobs, three thousand in Italy. All ‘proper’ jobs because we’ve developed new capabilities, improving results.”

Regarding OTO Melara, Profumo was keen to clarify that a potential sale “doesn’t depend only on us. These projects call for broader reflections at the level of the country system.” Then, continuing on the possible leading role that Leonardo aims to play in creating a European defence electronics hub: “It is good for us all to work together. In a European process, there should be basic consistency and reciprocity between the various actors.”

Talking about cybersecurity and the escalation in the complexity of current cybernetic attacks over these last few months, Profumo explained how the company would like “to be the benchmark for cybersecurity; we’re not interested in growth via external channels. We’re focused on developing proprietary technologies and launching the Cyber Academy project, created to become the sector standard, offering direct training and acting as a meeting place for third parties who use our facility for training.”

Leonardo aims to increase investment “in protecting specific sectors, starting with health, from strategic infrastructures to services. As a company, we’re continuously under attack, enabling us to build up experience. We’ve developed very extensive ‘libraries’ of attack models. And since cyber attackers move a bit like chess players with a series of preset moves, we are ready to respond, having accumulated a rich case history.”

On relations with Fincantieri, Profumo finally pointed out how there has always been cooperation between the two companies: “I am also convinced that we should strengthen it. When we look for orders abroad, we’d be able to act even more coordinatedly. We do the electronic part; they do the shipbuilding part. We must continue to work together: in this case, the Navy is the ‘customer’, which requires us to coordinate". 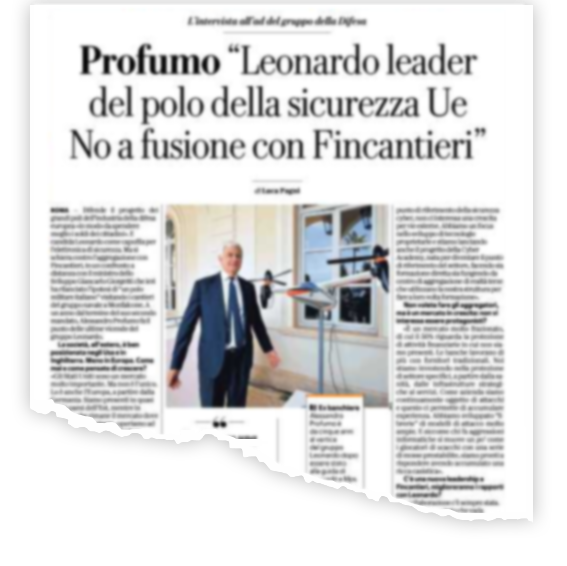