50 years since the first flight of the A109, an Italian success

The A109, the first completely Italian-designed twin-engine helicopter, performed its first flight on 4 August 1971, St. Dominic's Day, in honour of Count Domenico Agusta. He had authorised the construction of the first prototypes from which this successful helicopter was developed.

The A109 originated by request of Bruno Lovera, responsible for the design and construction of some helicopter models at the-then Agusta SpA, asked Domenico Agusta to authorise the manufacture of three prototypes, complete with spare parts, for a new revolutionary helicopter.

The first flight took place only two and a half years after the first feasibility studies. Piloted by Ottorino Lancia, the A109 immediately demonstrated a reduced level of vibrations, noise reduction, as well as remarkable manoeuvrability. This was the first project developed independently, the Company paid great attention to the customer and the mission, to facilitate the pilot's workload, and to the environment. 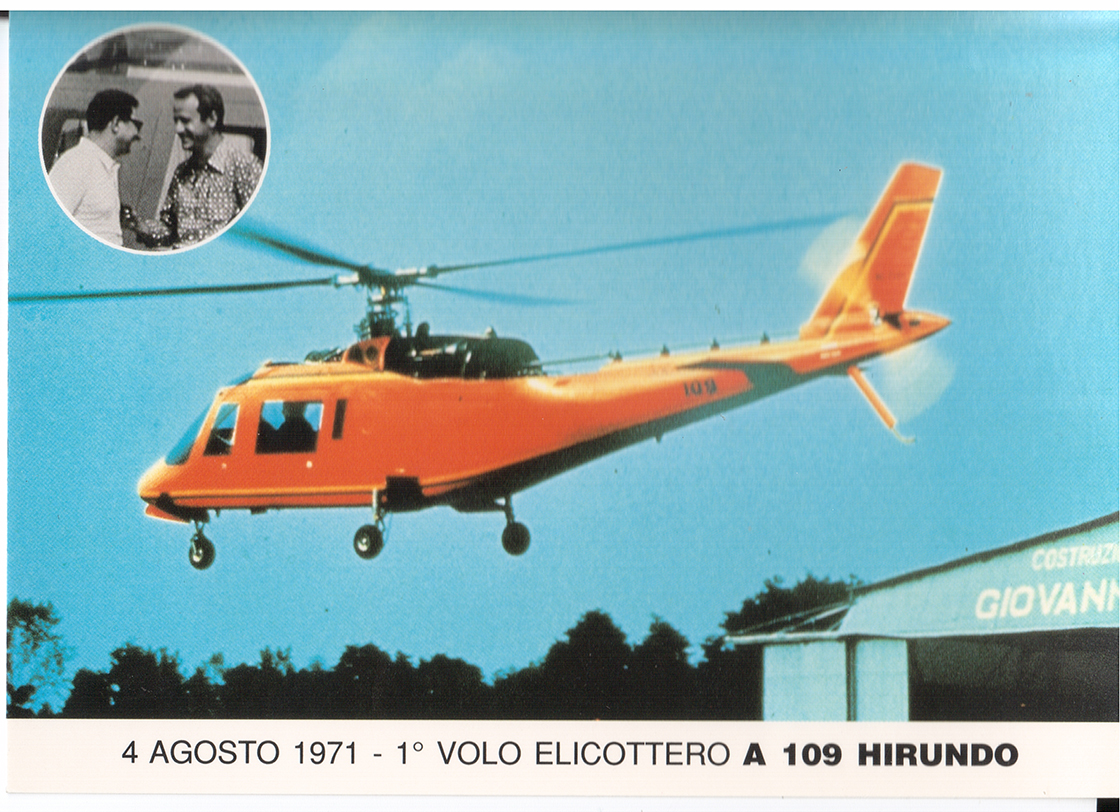 After the first flight, tests and studies continued on the prototype, to bring it to certification. In September 1971, a report was presented, accompanied by drawings relating to the final version of the A109, which would form the basis for any future development.

The A109 was equipped with innovative features, such as the four-blade articulated main rotor, the semi-rigid two-blade tail rotor. The fuselage was made of light alloy as well as the tail boom. The landing gear was highly researched, and was made retractable, with an adjustable wheel and two main half-carriages.

It was the first Italian-designed helicopter to receive certification from the RAI (Italian Aeronautical Register). Previously, the procedures were related to models already certified abroad or derived prototypes. In parallel, the certification for the A109 was also requested from the US FAA (Federal Aviation Administration).

The certification was obtained in 1975, both by RAI and by the FAA. In the certification documents the A109 was described as an eight-seat (including the pilot) aircraft with a total maximum weight of 2,400 kg and an empty weight of 1,400 kg. Its main rotor had four fully articulated blades; a semi-rigid two-blade tail rotor; two Allison 250-C20 engines, dual engine power of 692 SHP and single engine power of 400 shp and a VNE speed of 168 knots.

Thanks to the A109, the company switched from the production of licensed products to its own helicopters, thus entering the market among the main helicopter OEMs (Original Equipment Manufacturer) in the world. The FAA certification allowed access to the American market, a very important milestone, further strengthening the company's position in the world of OEM leaders of rotary-wing aircraft.

The final A109 assembly lines took place in the Agusta plants at Cascina Costa and Frosinone, respectively, for the civil versions and versions intended for defence. The modularity of the aircraft, as it was conceived, allowed production activities to be divided among all the companies of the group. Thanks to this approach, the manufacture management had the necessary flexibility to respond effectively to the production plans that adjusted it to a growing market and to meet customers’ needs. 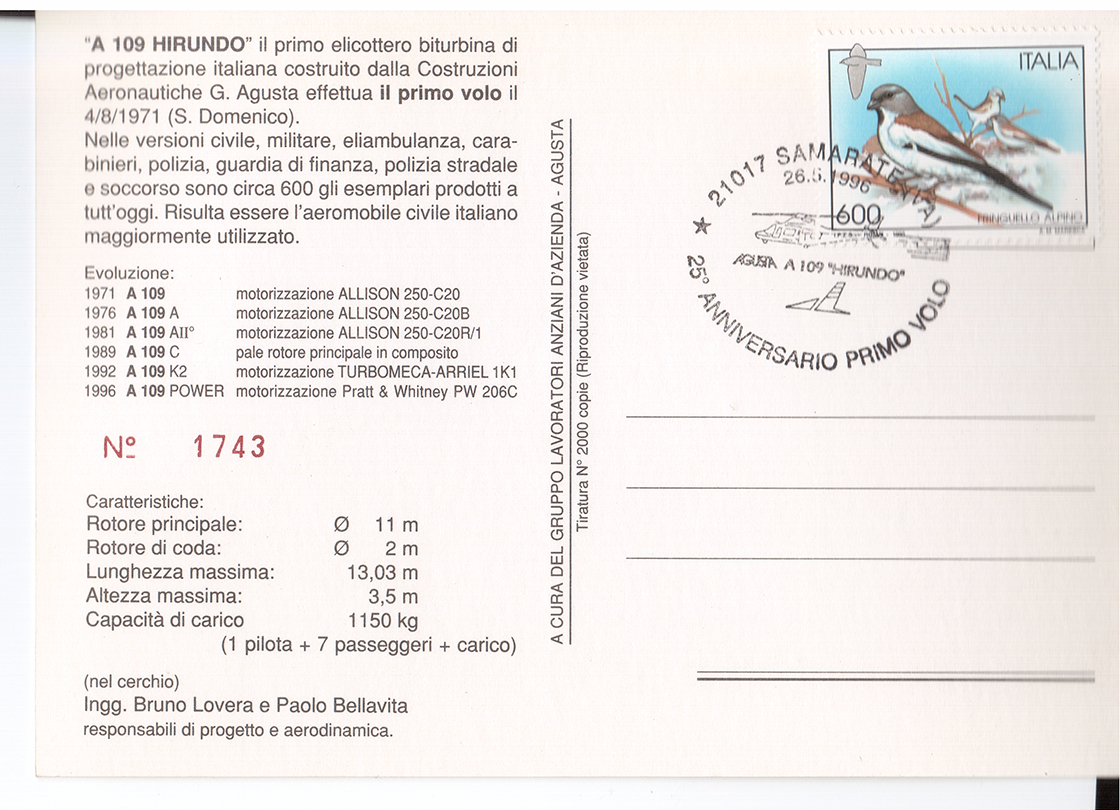 Deliveries began in 1976, to government customers, both in Italy and abroad. Most of the Italian institutional operators, from the Italian Army to the Police, Carabinieri, Guardia di Finanza and the Civil Protection Department, used the A109 in different configurations and for different missions.

Following the certification of the basic model, in fact, a series of versions dedicated to specific missions were developed: ambulance, police duties, mountain rescue, and surveillance missions on the sea: