Dealing with environmental emergencies is an increasingly complex challenge that requires integrated problem-solving management and the implementation of multiple, latest generation, strategic and technological tools to protect people and the territory.

From a geographical perspective, Europe, and especially Italy, is one of the world’s most complex territories. It is characterised by a vast wealth of fauna and flora and a marked transformation of the natural environment caused by human actions, along with numerous sites of historic interest. These issues are exacerbated further by the problems connected with the global warming, the deforestation, and the intrinsic fragility of the territory. Within this context, fires have enormous social and environmental costs that can often take decades of interventions to restore.

The growing complexities of fires are forcing the individual countries to deal with the challenge in an integrated manner, increasing Europe’s firefighting capabilities while taking the specific needs of each country into account.

An effective firefighting system has to meet a number of requirements: reach remote inland areas that are cut off from the sea or other water basins; optimise emergency response times; reduce environmental impact, in line with the European Green Deal directives; employ multi-mission solutions that can cut aircraft operating costs, while ensuring their continuous use, even in the winter months; ensure the availability of a vast number of common platforms with elevated operational flexibility that can deal with a variety of different missions, and the “aircraft system” must have a high degree of interoperability with the assets on the ground.

These increasingly essential capabilities make it possible to gather, share and collect a considerable amount of crucial data and information which, with the appropriate analysis, will optimise the effectiveness of the intervention, reducing operating times and costs, also thanks to logistics and training services, which can also benefit from the support systems already in use and deployed on other missions.

Aircraft, which are at the heart of this integrated system, are the most powerful tool at our disposal to help ground personnel put out fires. 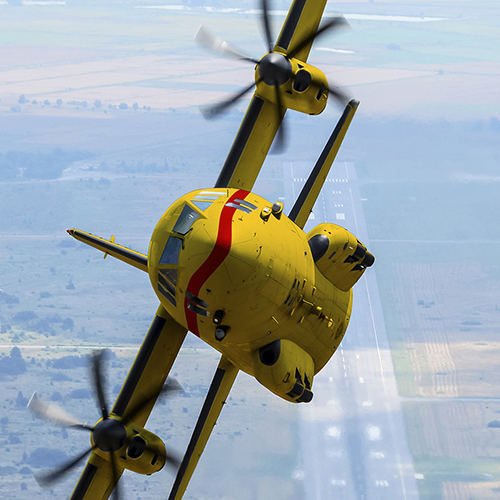 The Fire Fighter configuration proposed by Leonardo is a flexible solution, ideal for enhancing the capabilities of the C-27J Next Generation multi-mission aircraft and has significantly lower purchasing and operating costs than a dedicated firefighting platform.

The system consists in the installation of a removable tank with a capacity of over 8,000 litres of water or 7,600 litres of fire-retardant liquid in the aircraft’s cargo bay. A complete set of tools that includes a pressurised tank, an outlet nozzle, a pressurised door, and a ground support system.

In around 90 minutes, the C-27J can be transformed from a tactical transport aircraft to an aerial firefighter, thanks to the palletised Modular Airborne Fire Fighting System (MAFFS II), developed by United Aeronautical Corporation, a world leader in advanced aerial application systems.

But this solution is not just limited to fighting wildfires, it can also be used for prevention. In fact, the “reclamation” of high-risk territories, which are identified using existing or Leonardo’s in-house prevention, control, and early warning systems, can be performed from the C-27J Fire Fighter by dropping water over an extensive surface area, reducing the possibility of a wildfire outbreak in fire-prone areas.

Furthermore, the aircraft can be used in a complementary way to the amphibious solution to optimize firefighting effectiveness even in complex environmental or morphological conditions, such as high distance of the basins, adverse weather conditions (high waves, bad weather), or to support operations at low visibility and night.

One of the most innovative characteristics of the Leonardo C-27J-based firefighting solution is the rapid reconfiguration of the aircraft when the firefighting mission is over. This multi-functionality proves extremely useful for a variety of civil protection operations, all with the added advantage of greater operational effectiveness than a “traditional” or single-mission aerial fire fighter.

In fact, as well as carrying specialist emergency personnel, the aircraft can also be used for emergency support or transfer missions and/or to deliver the necessary equipment and supplies close to the affected area. Furthermore, when operating in inaccessible and hard to reach zones, the aircraft can be used in the MEDEVAC or Air Ambulance configurations to evacuate and transport injured people.

C-27J: on the front line worldwide

But the C-27J Spartan Next Generation is much more than a simple fire fighter, it embodies the very essence of the concept of national security, proving its proficiency in defence force operations and making a vital contribution to population support and civil protection tasks. In a world affected by a multitude of emergencies - the pandemic not least - the aircraft has shown it can provide effective, non-stop support to communities in need.

A multitude of kits and easy-to-install, transportable roll-on/roll-off mission systems allow the C-27J to be rapidly transformed into the required configuration for the mission at hand. As a tactical airlifter, the aircraft’s versatility also extends to airlifting cargo and troops; airdropping parachutists and supplies; medical battlefield evacuation; VIP transportation; natural disaster response and humanitarian assistance and support. In fact, during the crucial stages of the Covid-19 pandemic, the aircraft was primarily used for transporting medical supplies and equipment, ferrying medical personnel and coronavirus patients, and, in some cases, for complex transport operations that required the use of bio-containment kits.

The C-27J can be configured in MPA (Maritime Patrol), ASW (Anti-Submarine Warfare) and C3ISR (Command-Control-Communications, Intelligence, Surveillance and Reconnaissance) mode.

It can operate not only from civil airports, but also from semi-prepared runways and airfields, under extreme temperature conditions, reaching the most inaccessible regions, from coastal to forests and mountainous areas.

Stories
Aircraft
C-27J Spartan Next Generation: we talk about it with the Project Test Pilot
News
Aircraft
The C-27J twin-engine tactical transport plane
Stories
The C-27J Spartan lives up to expectations in Peru