Leonardo at MSPO: the multi-domain European partner for Polish defence

Leonardo is participating at MSPO, the International Defence Industry Exhibition held between 6th-9th September 2022 in Kielce, Poland. Over the four days of the exhibition, Leonardo is showcasing its most innovative solutions in the fields of aeronautics, helicopters, uncrewed systems and electronics in the defence domain.

A global player in the Aerospace, Defence and Security domains, delivering advanced solutions for the national defence sectors, Leonardo is a strategic partner of the Polish Ministry of Defence. During its 30-year presence in Poland, the company has made significant investment in the Polish defence industry, mainly through Polish helicopter manufacturer PZL-Świdnik. Now the Polish one of Leonardo’s four domestic markets, the company continues invest as emphasised through the recent establishment of Leonardo Poland and partnerships with local companies. Leonardo aims to strengthen its growing commitment to the country, providing solutions for military, government and civilian customers. The goal is to deliver both state-of-the-art products and value added for the Polish economy while meeting superior defence requirements.

Leonardo will be showcasing technology and product innovations related to the aeronautical sector, with a particular focus on the Eurofighter Typhoon programme, the multirole military AW149 helicopter, which was recently selected by the Polish MoD, uncrewed systems for the Polish MoD “Gryf” programme, its ammunition Vulcano, and other solutions for a variety of requirements.

MSPO visitors will be able to see the real AW149 helicopter which will be built in Poland. The Polish variant of the AW149 multirole helicopter will be produced at Leonardo’s local plant, PZL-Świdnik, which will deliver 32 aircrafts in 2023-2029. Leonardo will therefore undertake further investments in its Polish facility in addition to approximately 1 billion EUR already invested since 2010, which has significantly strengthened the competitiveness and the industrial capabilities of PZL-Świdnik. This provides an important contribution to the Polish aerospace and defence industry, which will enable domestic production, the establishment of a logistics base and thorough technical support for the Polish MoD’s AW149s, in line with Leonardo and PZL-Świdnik’s commitment to deliver industrial benefits to Poland. 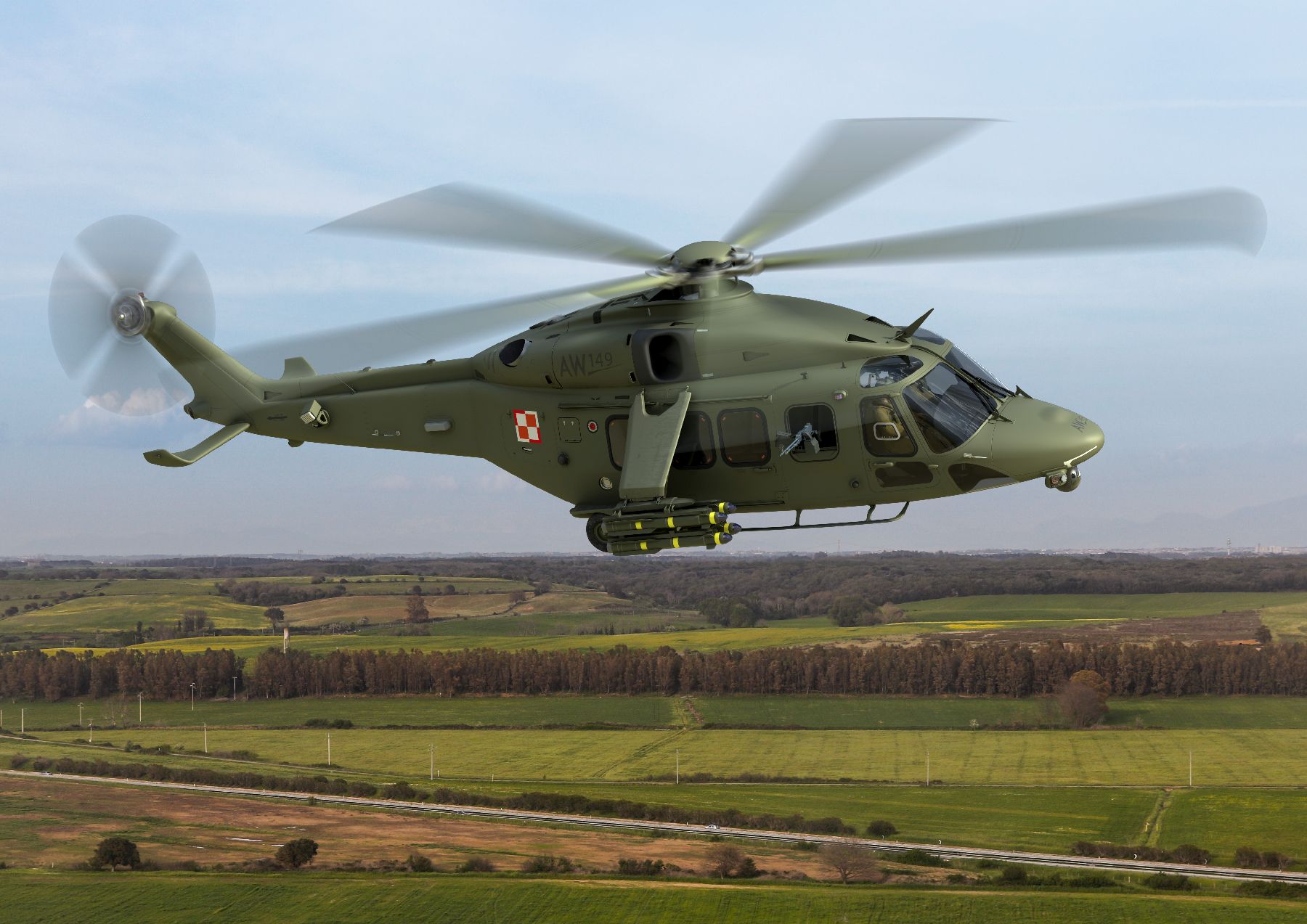 The new helicopters will carry out missions including troop transport and air support. The equipment of the helicopters will also allow them to be used for casualty evacuation, search and rescue in combat operations and for the transport of goods and supplies. The helicopters’ configuration, fully meeting the requirements of the Polish Armed Forces, will also include, among others, observation systems, small arms, guided/unguided rockets and missiles, and self-defence systems.

In the aeronautics sector, the spotlight is on the Eurofighter Typhoon, the best Air Superiority fighter available in the market today also for export customers. Its state-of-the art evolution is constant, solid, proven and represents the base for 6th generation fighters. Its E-scan radar, the Large Area Display (LAD) and Striker 2 Helmet are available for better situational awareness.

Leonardo is a partner company of the Eurofighter consortium producing about 36% of the entire programme value, playing a key role in the aeronautical and electronics components, and provides more than 60% of the aircraft’s on-board avionics.

The combination of new integrated sensors, new computer processing capabilities coupled with Artificial Intelligence, the “Digital Stealth” concept, without compromising on performance place the Typhoon at the highest scale of Air Dominance. 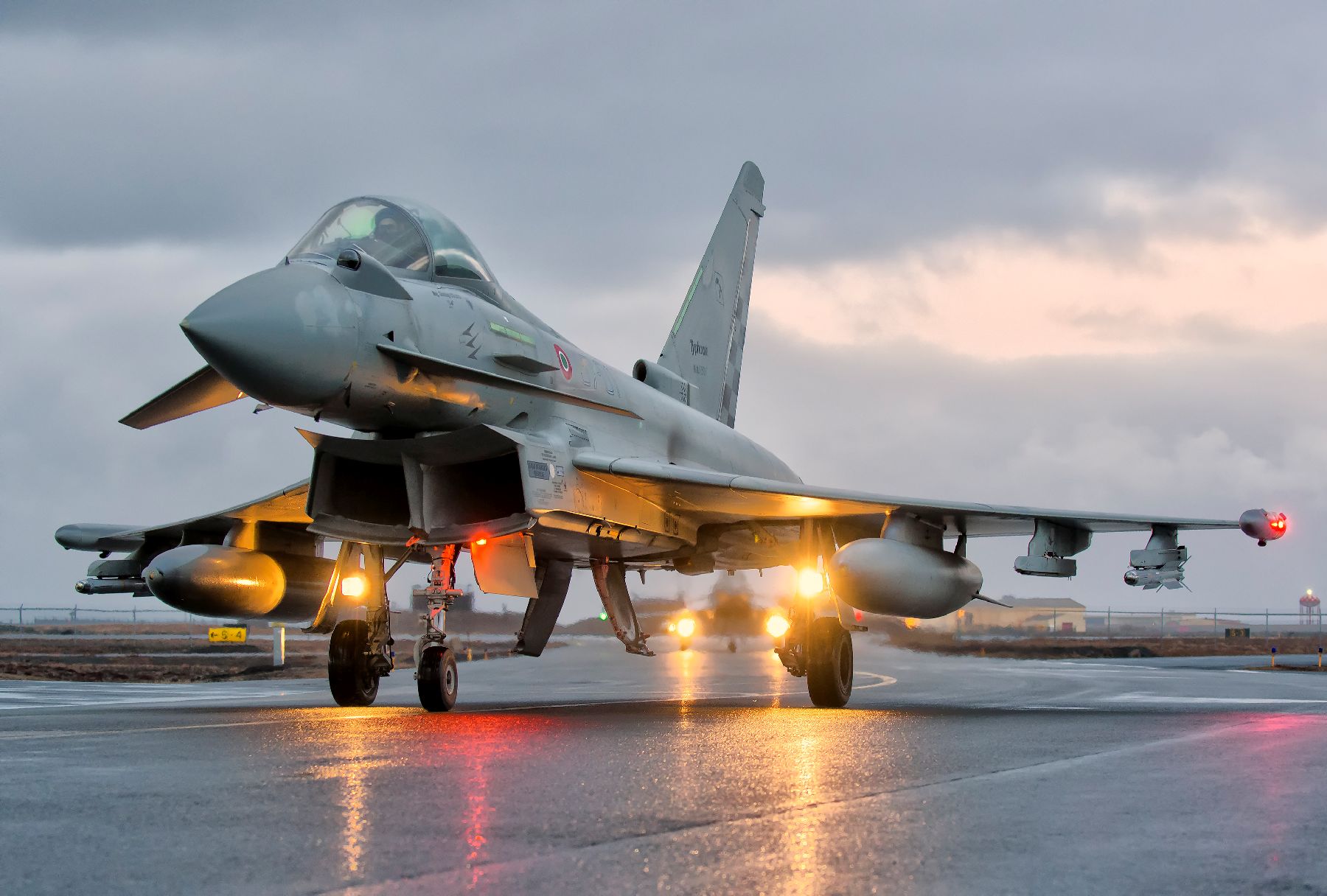 Poland is invited to join the programme of this extraordinary partnership that is now working to what it is - and it will be for the next decade - the most effective platform bridging to next generation fighters. A partnership that can grant Poland full access to aircraft capabilities, full national sovereignty and Polish qualified industrial qualitative and quantitative involvement.

The advantages of the Eurofighter Typhoon are its extraordinary aerodynamic capabilities combined with a smaller airframe and digital stealth thanks to the new gen E-scan radar and DASS, and the widest weapon capability.

In the meantime, the Italian Air Force Typhoon will grant the security of the Polish sky thanks to the Quick Reaction Alert (QRA) deployment that has just started at the Polish air base of Malbork.

Close to completion of the fleet delivery is the M-346 Master (“Bielik” for Polish Air Force) advanced jet trainers. The initial eight aircraft were ordered by Poland in 2014, followed by two other reordered batches for a total of 16 training platforms. This number makes Poland the second largest export customer of the M-346. 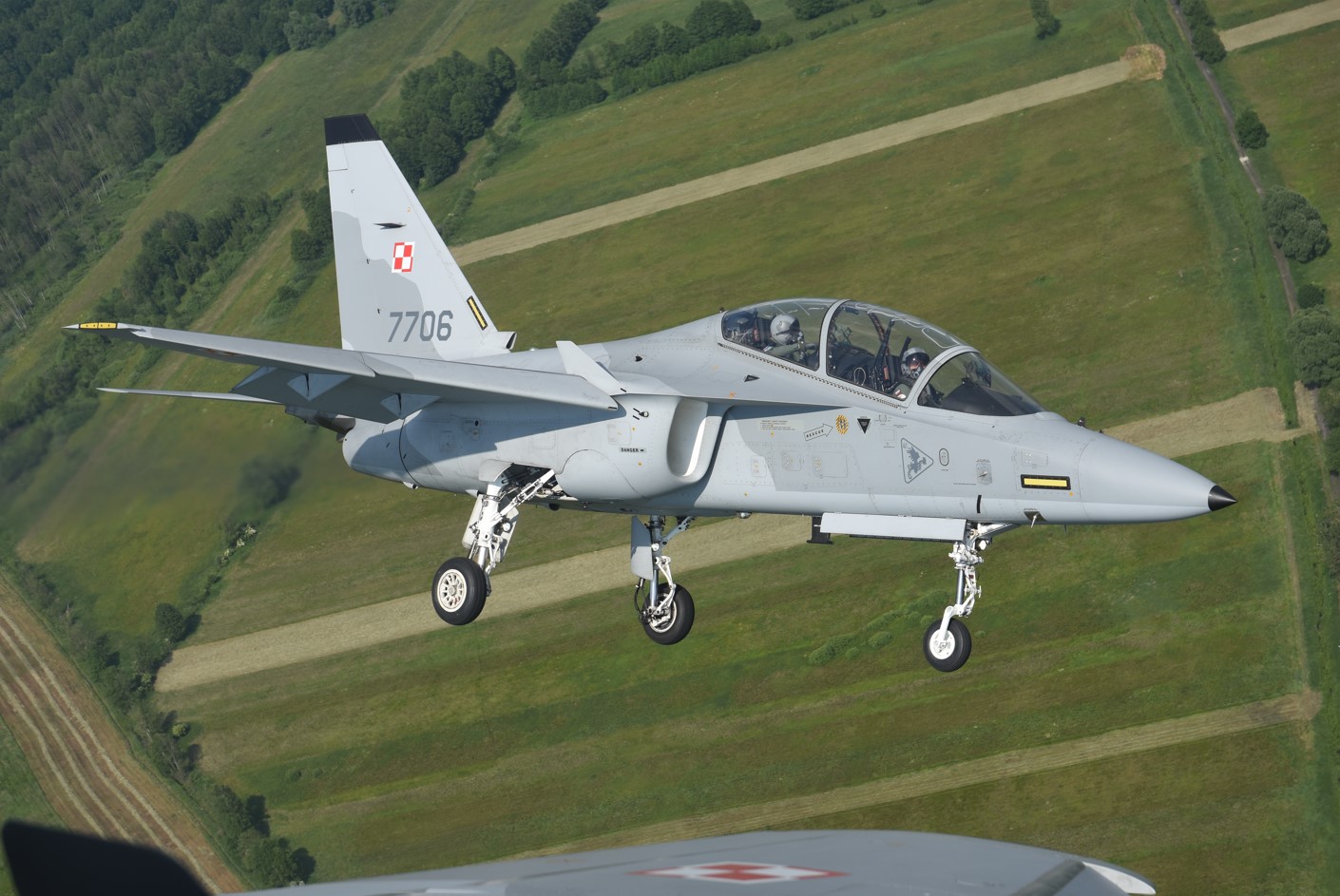 The M-346 is a twin-engine, tandem-seat, next generation advanced/lead-in (LIFT) jet trainer and light combat aircraft. The wide flight envelope, high thrust-to-weight ratio and ‘carefree’ manoeuvrability at high angles of attack make the M-346’s handling similar to that of latest-generation combat aircraft, like the Eurofighter Typhoon or the F-35. This maximises training effectiveness and reduces flight hours on front line aircraft.

The aircraft is the central element of an Integrated Training System comprised of simulators and ground based instructional devices, including an operational “Live, Virtual, and Constructive (LVC)” environment, designed to allow student pilots to develop knowledge, skills and practices needed for effective exploitation of modern combat aircraft. It is currently the most advanced training system on the market conceived for training future pilots.

Compared to its trainer version (M-346 AJT), the M-346FA (Fighter Attack) variant adopts an optimised version of the multi-mode Grifo M-346 radar deveoped by Leonardo. The aircraft is equipped with 7 external hard-points and air-to-air refuelling system and, while keeping all its training capabilities, thanks to the integration of state-of-the-art equipment and sensors, becomes an effective operational light attack fighter.

The exhibition provides a great occasion for Leonardo to display its most innovative products and systems in the field of the remotely piloted aircraft. Poland is running the “Gryf” programme and Leonardo will be presenting its state-of-the-art solution Falco, which is the complete package for uncrewed air surveillance. The company is putting forward its expertise in remotely piloted air systems (RPAS) to support surveillance and security missions worldwide. 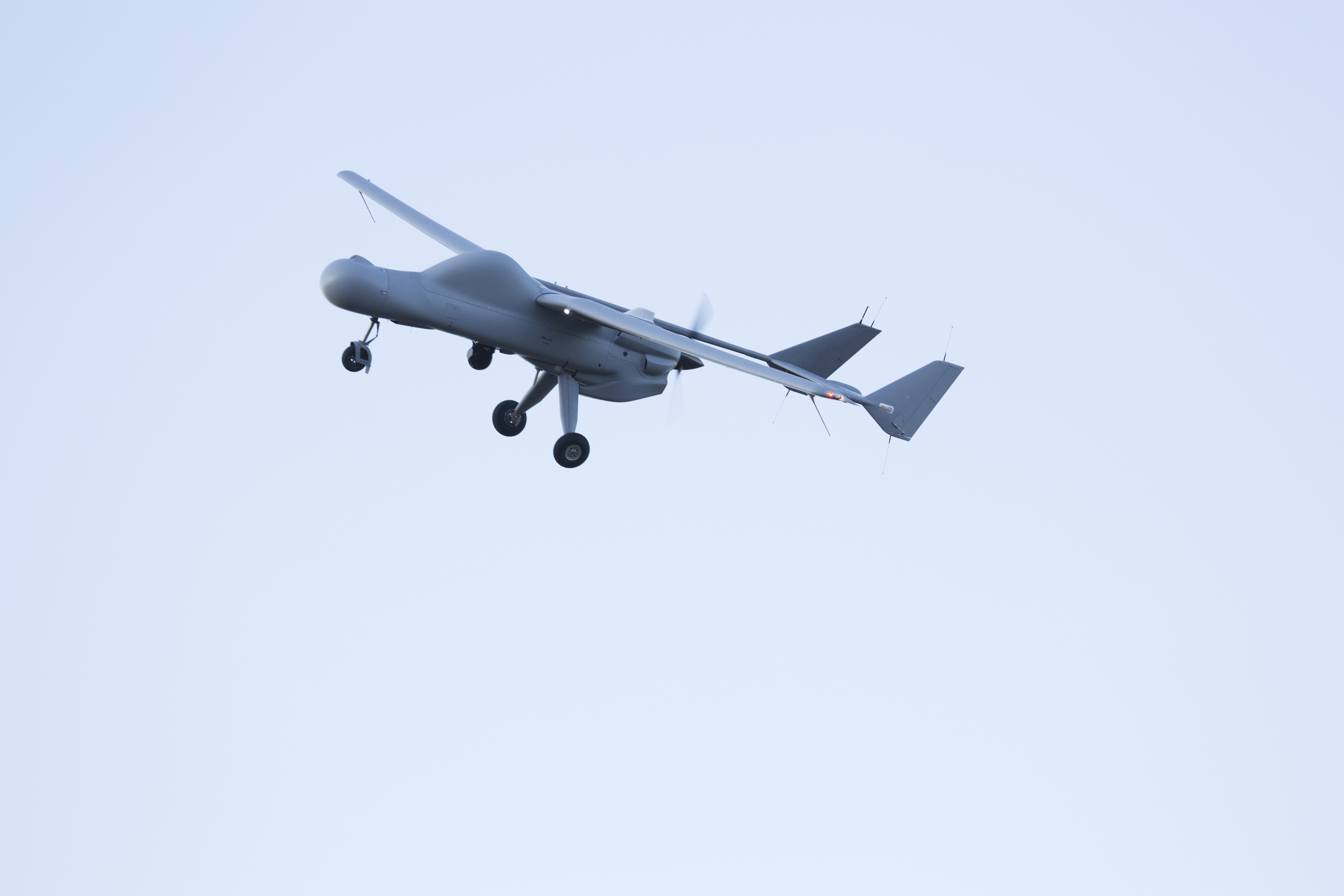 Leonardo’s Falco family of remotely-piloted aircraft systems currently include the mature and proven Falco Evo for heavy tactical surveillance missions and the new Falco Xplorer, a larger system designed to deliver persistent, multi-sensor strategic surveillance. The company has extensive experience operating Falco family aircraft in a range of environments, including the harsh equatorial African climate, where Leonardo has delivered over 10,000 hours of uncrewed surveillance flights. A recent highlight saw the Falco family supporting missions in the Mediterranean as part of the European Frontex agency's maritime surveillance project in 2018 and, today, the uncrewed aircraft are flying to support border surveillance for another Italian initiative. Currently, more than 60 Falco family aircraft are operated worldwide.

The Falco Evo is designed for ISR tactical roles and has a number of characteristics that make it an ideal tool for such missions: monitoring wide areas of land and sea and enabling timely targeted interventions. These include its ability to fly in all-weather conditions, any time, day and night, its more than 16 hours of flight endurance, its 100kg of sensors capacity and its communications capabilities, which allow the aircraft to transmit quality images and real-time data.

The state-of-the-art ammunition showcased at Leonardo’s stand is the Vulcano 155 mm, a family of subcalibre ammunition for 155mm Land artillery systems comprised of an unguided projectile called BER (Ballistic Extended Range) and a guided one called GLR (Guided Long Range). The ammunition represents the most advanced technology currently available for precise land artillery firings. The Vulcano projectile is specifically conceived to improve the performance of other ammunition of the same calibre, both in range and accuracy, while maintaining compatibility with the in-service propelling charges and 155mm barrels. The outline of the ammunition is almost identical to that of conventional rounds, which enables it to be handled without any additional logistical burden.

The main application of the Vulcano 155 GLR is for long range, high accuracy fire support against stationary and moving point targets with the extremely reduced likelihood of collateral damage. The outstanding aerodynamics, coupled with the GPS guidance and trajectory shaping capabilities, enable the Vulcano 155 GLR to reach a max range of 70km while keeping an extreme accuracy of less than 5m within all operational ranges.

Leonardo DRS is also participating in the show with its own stand in the USA pavilion, highlighting a range of technologies, including battle management and electronic warfare systems, and mounted EO/IR products among a range of other products. 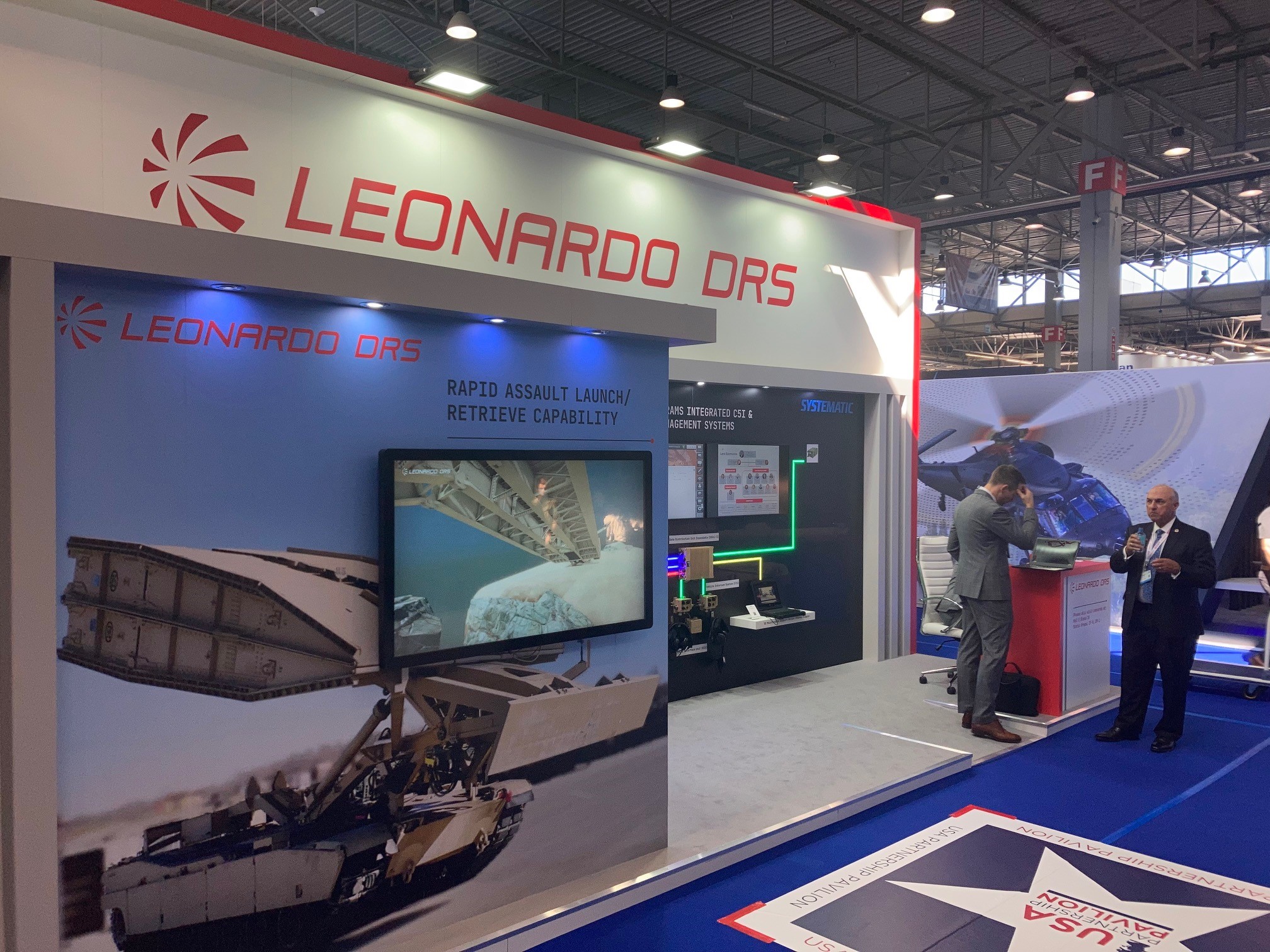