On a mission with the ATR 72MP

Strait of Sicily. The temperature at sea level is high. The ATR 72MP, produced by Leonardo, designated P-72A by the Italian Air Force, belongs to the 41° Stormo – Wing, has taken off a couple of hours earlier from the Sigonella Air Base. On board, one of the four Mission System Operators (MSO) carefully watches over the sea surface with the Seaspray 7300E active electronically scanned radar also produced by Leonardo.

Strait of Sicily. The temperature at sea level is high. The ATR 72MP, produced by Leonardo, designated P-72A by the Italian Air Force, belongs to the 41° Stormo – Wing, has taken off a couple of hours earlier from the Sigonella Air Base. On board, one of the four Mission System Operators (MSO) carefully watches over the sea surface with the Seaspray 7300E active electronically scanned radar also produced by Leonardo.

A suspicious track needs further investigation: with the ISAR (Inverse Synthetic Aperture Radar) mode the operator gets a clear profile of what turns out to be a large vessel. The onboard Tactical Coordinator (TACCO) carefully coordinates the operational activity and immediately orders another operator to follow the unit even more closely through the stabilised turret’s electro-optical sensors: now the ship's identification number can be clearly read and the investigation can go ahead.  If necessary, in case of emergency, the onboard technician (OBT), is ready to drop self-inflating life rafts from the rear door, which can be opened in flight.

“The mission system operator, thanks to the high multirole capacity provided by the Multifunction Operator Console (MOC),” one of the MSOs explains, “can operate with three main sensors, radar, electro-optical as well as with the ESM (for detecting, analysing and identifying 360° any electro-magnetic emitter). These can be configured for any tactical/operational mission as well as to exchange high-speed data and information with the command and control centres via advanced Tactical Data Link and satellite communication systems.” Therefore, the system stands out for its netcentric and C4ISR (Command, Control, Comunication, Computer, Intelligence, Surveillance and Reconnaissance) capabilities made possible also by the communication systems that make it suitable for NATO operations. 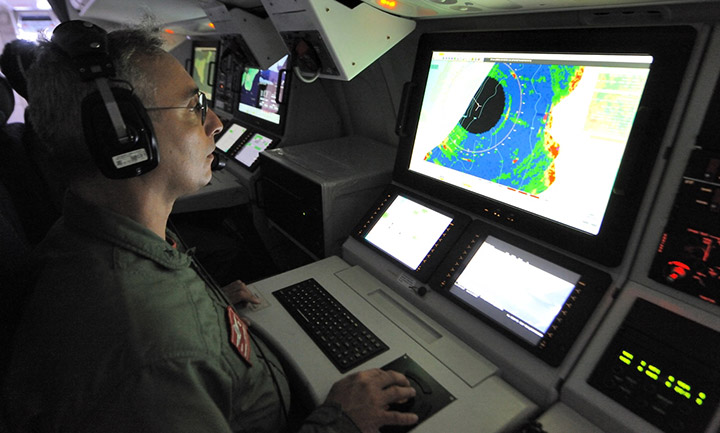 The MOCs are integrated within Leonardo’s ATOS (Airborne Tactical Observation System) mission system, the aircraft's real operational heart. As the Tactical Coordinator explains, “The P-72A has an enormous capability to acquire information and to provide it to the crew with a human-machine interface that provides the option of having all the elements required to maintain a mission situational awareness concentrated on just one display. The performance of the mission system and of the sensors considerably reduce the time needed to achieve the objectives to be pursued. This allows to adjust, wherever possible, the time spent in the operations area, thus optimising the aircraft's range.” 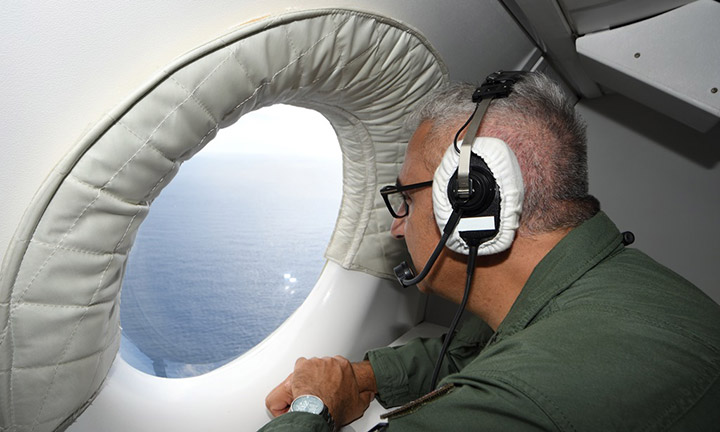 The onboard technician at the observation station

An expert pilot perfectly summarises the new aircraft's philosophy, “The P-72A is like a smartphone, partly a telephone, partly a navigator, partly a computer...everything is perfectly integrated and networked.”

The training process on the P-72A is carried out in two phases. In the first phase, the squadron's pilot, a qualified military pilot, is sent to the ATR Training Centre in Toulouse and trained on the civil version, the ATR 72-600. The theoretical part is carried out with a flight simulator and the practical part on board a real aircraft. The second phase is carried out at Sigonella Air Base, where the 41° Stormo’s 86th Crew Training Centre (CAE) trains pilots who will fly the P-72A, with a theoretical part followed by a practical one directly on the aircraft.

The P-72A is equipped with one of the most modern “glass cockpits” available on the market. It originates from the one of the commercial ATR -600 versions with differences that are absolutely minimal. Therefore, a pilot coming from the ATR Training Centre in Toulouse can start the operational training straight away. 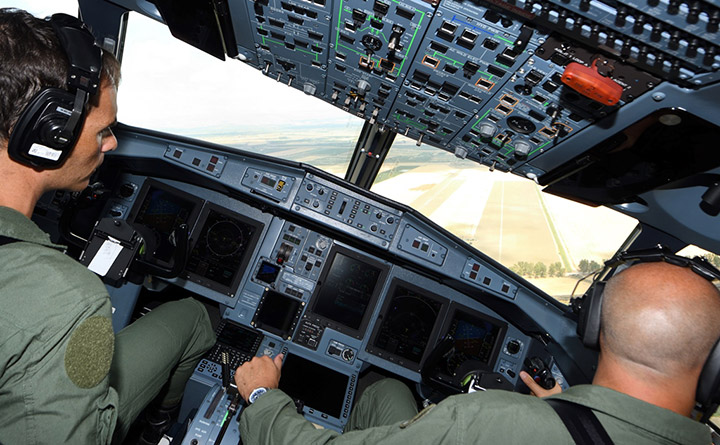 “It is a military version of a civil aircraft,” a P-72A pilot explains. “This feature provides an optimisation for the flight management, the mission systems, the continuous monitoring of the flight parameters so that high safety levels are assured in all conditions.” The pilot points out that, “The two engines respond promptly especially at low altitudes. Thus, the engine power settings for the various operational altitudes and speeds can be regulated precisely, this allows for a good range management.”

A standard passenger ATR 72-600, produced by the ATR joint partnership at Leonardo's facility in Pomigliano d’Arco and Airbus' facility in Toulouse, was the starting point for the P-72A that underwent a substantial conversion due to a number of structural and system modifications that are required by the MP (Maritime Patrol) configuration.

As Captain Matteo Maurizio, Leonardo’s Project Test Pilot Airlifter & UAS with over 5,000 flight hours and 18 years of flight test experience points out, “The first aircraft has been transferred to Leonardo's Turin-Caselle South facility after successfully passing all the ground tests. Here its final assembly has been completed and it has undergone all the flight tests required before being delivered to the customer. This involved a long and complex test campaign of more than 90 flights for over 150 flight hours in total.”

A P-72A back from a mission at Sigonella Air Base

With just under 1,500 aircraft delivered, over 200 commercial and military operators in more than 100 countries, over 30 million flight hours, ATR assures reliability, operational availability and extremely efficient logistic support on a worldwide scale.

Not only, but many ATR operators fly every day from a number of islands and sea environments, thus the most suitable anti-corrosion strategies are already built into the aircraft. This provides an ideal platform for an aircraft such as the P-72 that carries out most of its missions at low altitudes over the sea.

“The P-72A is a modern aircraft with a state-of-the-art technology capable of giving its best with a suite of sensors that are perfectly integrated within the ATOS mission system,” the 41° Stormo personnel explains. “Often we define the P-72A as an MP+ aircraft. This aircraft was planned to be a maritime patrol aircraft but it offers a potential the goes well beyond patrolling with a wide range of assignable missions. The aircraft's operational flexibility is remarkable, making it easy to be redeployed almost anywhere. This increases its persistence in the operations' area.”

The system is equipped with a Ground Support Station that allows crews to plan the mission and then send, in-flight, images and tactical data collected in near real time via  the satellite channel. Data, disseminated to the Command Centres, can be used both for conducting operations, and for any re-planning needs in times consistent with the operational scenario’s evolution. 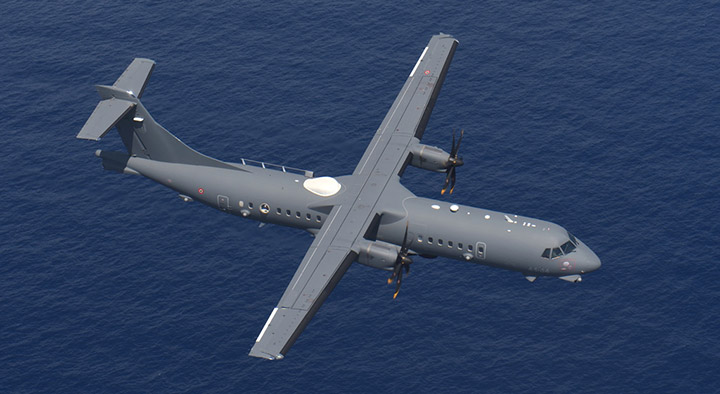 The P-72As very first operational use was in 2017 as a support for the security implemented for the G7 summit in Taormina, Italy. The 41° Stormo’s P-72As are manned by mixed crews, formed by personnel belonging both to the Air Force as well as to the Navy. They assure that a platform that perfectly meets the ever more urging maritime patrol, surveillance, search and rescue needs in the Mediterranean Sea will be constantly present. The most recent employ was as part of the air and sea deployment within the Operazione Mare Sicuro (Safe Sea Operation - OMS).