Leonardo's Board of Directors, convened today under the Chairmanship of Luciano Carta, examined and unanimously approved results of the first half 2022.

Alessandro Profumo, Leonardo CEO, stated “Our good first half results allow us to confirm our full year 2022 Guidance. We have delivered a stronger performance in all metrics, including EBITA and FOCF, and achieved a strong performance and continued growth in new order intake, in all sectors, both domestically and internationally, carrying this commercial momentum into the second half. We are also pleased to see this positive performance being reflected by the revision of our outlook to a positive by S&P and Moody's”.

"In addition to the positive business and financial performance - Alessandro Profumo concludes - during the first half we finalized important long-term strategic transactions that allow Leonardo to play a role as a global player in Aerospace and Defence. In Europe we completed the acquisition of the stake in Hensoldt, while in the US we first focused the Leonardo DRS portfolio with the disposals of GES and AAC, and then reinforced its core strategic business through RADA, providing further growth, margins expansion and opportunities in the wider Group. With this transaction we have also seized the opportunity of listing DRS in the current context of volatile markets, thus delivering on what we promised last year. Finally, few weeks ago, we organized our first ESG Investor Day demonstrating that ESG is at the core of our Plan to create long term sustainable growth and value for all our stakeholders”.

The results of the first six months of 2022 confirm the well-established path to growth and increased profitability expected starting from 2020, even more pronounced considering that EBITA for the first half of 2021 - unlike the half-year period under comparison - includes as recurring costs the charges related to the COVID emergency.

The restated figures for the comparative periods have been provided in order to make the two periods comparable.

The volume of new orders continued to increase significantly, while Revenues and EBITA showed increases in all the main Business areas.

Cash flows, although affected by the usual interim performance characterised by significant outflows in the first part of the year, are also clearly improving compared to the same period of the prior year.

Furthermore, the Group Net Debt figure reflects the acquisition of the 25.1% investment in the German company Hensoldt (€mil. 606, plus related transaction costs) occurred at the beginning of January 2022. 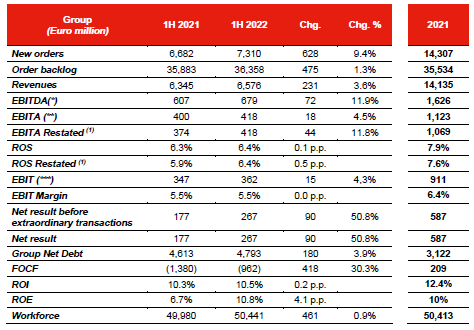 (*) EBITDA is given by EBITA, as defined below, before amortisation and depreciation (excluding amortisation of intangible assets arising from business combinations) and impairment losses (net of those relating to goodwill or classified among “non-recurring costs”).

(***) EBIT is obtained by adding to Income before tax and financial expenses (defined as earnings before “financial income and expense”, “share of profits (losses) of equity- accounted investees”, “income taxes” and “Profit (loss) from discontinued operations”) the Group’s share of profit in the results of its strategic investments (MBDA, GIE ATR, TAS, Telespazio and Hensoldt), reported in the “share of profits (losses) of equity-accounted investees”. Until 31 December 2021 this indicator included solely the part of the results of the strategic joint ventures (MBDA, GIE ATR, TAS and Telespazio) pertaining to the Group.

(1) EBITA and ROS have been restated to include charges related to the COVID emergency, which until the 2021 financial statements were excluded from these indicators as they were classified as 'non-recurring charges'”