Leonardo’s Technological Leadership at the Service of EU Common Defence

Leonardo reaffirms its position as a global leader in the Aerospace, Defence and Security industries, playing a driving role in key strategic cooperation initiatives and the technological cycles of the future.

The Group, which operates in 150 countries with a team of more than 50,000 employees worldwide and a supply chain involving 11,000 companies (4000 of which are located in Italy), acts as an industrial driver of the country’s interests in Europe, promoting new know-how and skills, while responding to the challenges posed by the complexities of the digital era. These goals are part of the “Be Tomorrow 2030” strategic plan defined in 2020: a road map that outlines Leonardo’s strategic vision for the decade to come and beyond. The goals of the plan include the promotion of competitiveness, technological sovereignty, innovation in the European defence industry, and the development of cooperation initiatives between member states, such as the use of the European Defence Fund.

EUROPE AS A GEOPOLITICAL ENTITY
“The current scenario imposes an ever-increasing need for Europe to emerge not purely as an economic force but as a geopolitical entity”, explains Leonardo’s Chief Strategy & Market Intelligence Officer Enrico Savio. “A need that requires the construction of a collective European defence policy and active support for sector companies working on the progressive development of a common defence system”.

With exports accounting for more than 80% of its revenue, Leonardo plays a strategic role in the industrial development of the countries where it operates, also achieved through prominent international partnership agreements. Examples include Leonardo’s involvement in important joint programmes and core European defence initiatives, such as the Tempest team, the Eurodrone programme, and Surveillance, Target Acquisition and Reconnaissance (ISTAR). Other projects include Gaia-X, an initiative for the construction of a pan-European cloud; partnerships in the aeronautical industry, such as CleanSky and SESAR, and space programmes, such as Galileo, Copernicus, COSMO-SkyMed, ExoMars and Artemis.

TECHNOLOGICAL LEADERSHIP AND STRATEGIC INVESTMENT IN R&D
“As an industrial and technological leader, Leonardo’s primary objective is to contribute to Pan-European independence and digital autonomy, supporting technological sovereignty as an essential condition for the country’s development,” underlines Savio, “and the development of new skills for responding to the challenges posed by the complexities of the digital era”. In fact, Leonardo’s goal of becoming a technological leader has already become a reality with the installation of the davinci-1 HPC and the creation of the Leonardo Labs network.

These results were achieved thanks to a 1.8 billion euro investment in Research & Development in 2021, a 16.9% increase on the previous year, with a special focus on cloud computing, artificial intelligence, innovative materials and autonomous smart systems, and increasing specialisation in “secure” data management. “Today, and increasingly in the future, Leonardo intends to ensure operational superiority by building value proposition that gets the most out of secure computing in terms of the amount of data handled and the speed at which the data is processed and transmitted”, Savio concludes.

19 PROJECTS AWARDED THROUGH THE EDF
The European Defence Fund (EDF), the tool with which the European Commission promotes cooperation in defence with competitive and collaborative projects covering the entire research and development cycle, assigned more projects to Leonardo than to any other player in Europe: 19 projects (11 for capacitive development and 8 for research) out of a total of 61 projects approved. The Group was awarded funding for research and development in all 12 of the categories in which it participated, pertaining to electronics, aircraft, helicopters, cyber security and space. 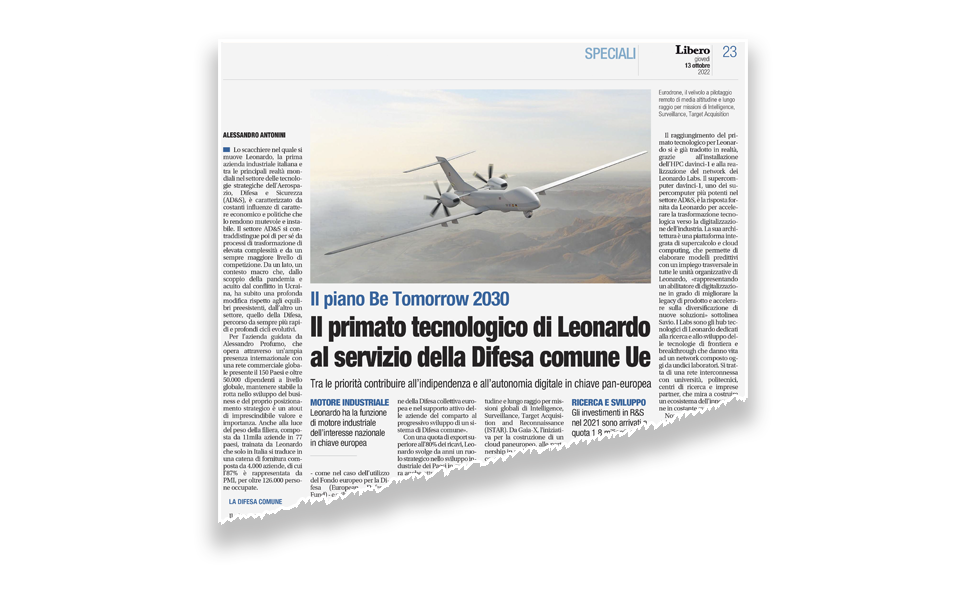